Most dictionaries enter donut as a variant of doughnut. The spelling of donut without the -ough has appeared in enough written sources (and been made popular by brands such as Dunkin' Donuts) that it has become an accepted spelling.

While donut lovers line up annually for free goodies on National Donut Day, readers year-round occasionally notice that we do include this shorter spelling, as well as doughnut, and let us know they're displeased. 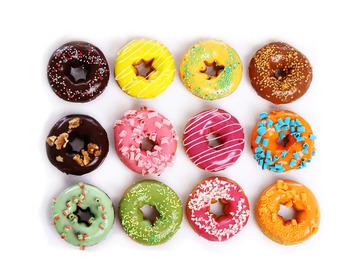 We're not the only ones; it looks like any dictionary worth its salt includes it. Here's why donut is included in our dictionaries.

We've been encountering the variant donut in published, edited text since the mid-20th century. It was certainly helped along by famous doughnut purveyors – both Dunkin' and Mister – but in truth they and all who've accepted the variant were following in a tradition of phonetic-based spelling reform also embraced by the likes of Benjamin Franklin and Noah Webster. And when we consider the variety of things the letter combination ough does in English – tough, though, through, drought, bought, cough – surely it's not wholly irrational to welcome the simplification that donut offers.

Noah Webster (from whose dictionaries ours are directly descended) included simplified spellings in his dictionaries because he believed in spelling reform, but we have no similar ideological rationale for including variant spellings. Our inclusion of donut is based solely on evidence of the variant in a variety of published, edited texts. It is at this point a fully accepted spelling, though rumor has it the Associated Press still prefers doughnut.