We hope you don't feel pain of either sort.

Everyone will occasionally confuse one word with another, especially in cases where the two are closely related in meaning. This is quite excusable, as none of us manage to use our words in a way that is without reproach by all. And should enough people confuse the two words for long enough (and mostly do it in a similar manner) then one of these words will take on a new meaning, and we'll have a great big party in Springfield during which we invoke dark forces, ceremoniously write the new semantically drifted definition in blood, and probably even eat some cake.

But it takes a considerable amount of use over a considerable length of time before we (or any other dictionary) will consider that a word which is used in creative fashion merits a new definition; most of the time we look at the questionable use and think “that’s a mistake.” As when chronic is where one might otherwise use acute. 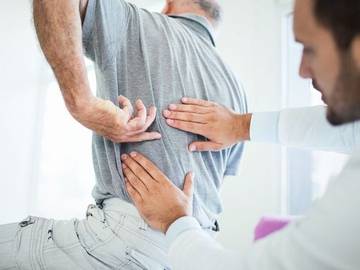 The settings in which this confusion occurs tend to be medical, especially those which deal with pain. You may suffer from acute pain or from chronic pain, and the meanings for each of these regrettable circumstances are rather different. Acute has a large number of meanings (relating to sensory matters, angles, pitch of sound, etc.) but the one concerned with matters medical is “characterized by sharpness or severity” and “having a sudden onset, sharp rise, and short course.” The definitions of chronic, when referring to pain or an ailment, are more along the lines of “marked by long duration, by frequent recurrence over a long time, and often by slowly progressing seriousness” and “not acute.”

One way to distinguish between these words is to pay attention to their roots. Acute comes from the Latin acūtus, meaning “sharpened, pointed, having a violent onset, discerning, less than 90 degrees (of an angle).” Chronic is from the Greek word for “time,” chronos. Both of these words, when they came into the English language, had their now-common medical meaning as the first documented use. For acute this meaning was the “characterized by sharpness or severity” sense, and chronic was initially used in the aforementioned “not acute” sense.

The earliest written record we currently have of chronic is, as they say, a doozy, combining the awkward orthography of pre-standardized spelling, astronomy, sexually transmitted diseases (it’s about syphilis), and a healthy dose of xenophobia (the disease in question is referred to as the French Pox).

This malady is cronique, longe sence, and extendyd through the nature of Saturne, whose scabbes, pusshes, and inwarde & out|ward goutes, whiche ar of ye nature of Mars shalbe shortely in Aries.
— Thomas Paynell, A Moche Profitable Treatise Against the Pestilence, 1534

It is easy to see how these two words might be used interchangeably, since both “acute pain” and “chronic pain” fit well into the category of ‘things we would rather not have happen.’ But when describing an affliction or ailment you would do well to reserve acute for short and violent episodes and chronic for those of greater duration. The fact that acute indigestion and chronic indigestion are both deeply unpleasant conditions which are concerned with your stomach does not make them synonymous.

Chronic has expanded its meaning in other areas as well, and may be found used with the meaning “habitual.” Some usage guides feel that this use is ill-advised, and to be avoided. However, this non-medical sense of the word has had currency for hundreds of years, and may be used without trepidation. And yes, we are aware of the marijuana sense of chronic, and are carefully monitoring its use.

There always are, and doubtless there always will be, in every organization, some few men who are never satisfied with what is, chiefly because their own superlative merits are not properly appreciated, and their sage advice followed. This class of hangers on may be aptly styled chronic grumblers.
— The Brattleboro Eagle (Brattleboro, VT), 5 Aug. 1853