Is it Wrong to Say 'From Whence'?

Whence means "from what place, source, or cause." Does that mean that saying "from whence" is wrong? 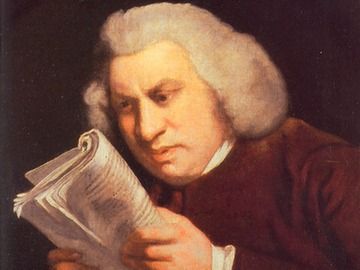 Samuel Johnson, shown here grimacing at a contemporary's use of the phrase 'from whence', called it "a vitious mode of speech."

Samuel Johnson certainly seemed to think so. In his 1755 A Dictionary of the English Language, he called from whence "a vitious mode of speech."

That was no compliment, although vicious, as we now spell it, was a bit milder then; it mostly described very bad habits. The from whence habit was one that Johnson himself occasionally fell into, if you believe his biographer:

There is nothing served about there; neither tea, nor coffee, nor lemonade, nor anything whatever; and depend upon it, Sir, a man does not love to go to a place from whence he comes out exactly as he went in — Samuel Johnson, quoted in Boswell's The Life of Samuel Johnson, 1791

Poor Sam. We hope he wouldn't be too hard on himself about it. The fact is that he was in good company. Many well-regarded writers before and after Johnson have used from whence:

Let them be whipp'd through every market town till they come to Berwick, from whence they came. — Shakespeare, Henry VI, part 2, 1592

Some of these same writers sometimes preferred the bare adverb:

As in centuries past, whence in the 21st is sometimes found with from and sometimes not:

During an annual trip to the South by Southwest music festival in Austin, Texas, they heard a band they liked. From whence had this up-and-comer come? San Francisco. — Chloe Roth, The San Francisco Chronicle, 4 Aug. 2011

Your choice of words can reveal a lot about where you come from. But a new study shows that your speed and cadence of words can also be used to tell from whence you hail … — Marissa Fessenden, Smithsonian.com, 5 Feb. 2016

A half-hour later she was onstage, strutting around in a sequined catsuit, shot back into the orbit from whence she came. — David Amsden, W Magazine, 3 Feb. 2016

The departure of the Rams to Los Angeles, whence they came two decades ago, is something for the city’s residents to cheer, not bemoan. — Joe Nocera, The New York Times, 15 Jan. 2016

In a Newfoundland book she read that a boy's mother told him people's freckles washed off in protracted rains; the freckles floated in puddles whence unwise children filled up on them and spoiled their dinners. — Annie Dillard, Harper's, November 2003

The fact is that both the phrase and the bare adverb have been used for centuries, and there is nothing wrong with either. Whatever the condemnations that sometimes are made, from whence is well established, and you should feel free to use it, or not. We won't think you vicious either way.