Many people find comfort in certainty (or at least in the illusion of it), both in language and in life, eschewing wherever possible the messiness of ambiguity. For example, we can usually find certainty when considering moral matters and the like, but insofar as language is concerned, finding that level of clarity can sometimes be a troublesome endeavor. Take, for example, the issue of redundancy.

We seem to allow certain kinds of redundancy, particularly when they're not immediately apparent, or when they provide some benefit, such as improved clarity or a euphonious meter. An example of this permissible redundancy is found in Shakespeare’s Richard II, in which he wrote “And both return back to their chairs” (if they return, it is redundant to also use back). Other forms of redundancy, such as ATM machine, stick in the craws of many (as the non-abbreviated form of this would be automatic teller machine). But while one of these clearly feels right to most people and the other sounds discordant, English provides us with many less obvious cases, such as consensus of opinion. 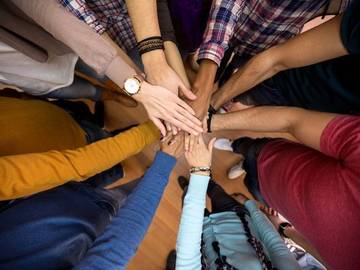 The "general agreement" sense of 'consensus' can be paired with 'opinion' without redundancy.

This combination of words has been widely shunned by many usage guides over the past century, based on the notion that consensus carries the meaning “collective opinion” and therefore the word opinion is not necessary. However, the “opinion” sense of consensus is but one of several possible meanings, and claiming that it should never be paired with opinion is perhaps an overly strict interpretation.

The “collective opinion” sense of consensus includes the idea of “judgment arrived at by most of those concerned,” which does not typically indicate unanimity: when paired with consensus used in this way, using opinion can bring us perilously close to a logical redundancy. However, another meaning of consensus is “general agreement; unanimity,” and when added to this sense opinion is not so redundant. Both of these senses appear to have originated in mid-19th century English, and we have been using consensus of opinion for over 150 years now.

There seems to be a general consensus of opinion that the education given in the ordinary elementary schools of this country to the children of the poor is not sufficiently practical—that they are not properly trained in industry.
— Harry Chester (letter), The Times (London, Eng.), 3 Jan. 1851

In determining the question as to the existence of a consensus of opinions on any speculative subject, it would be absurd to take barbarous or half-civilized communities into the account.
— George Cornewall Lewis, An Essay on the Influence of Authority in Matters of Opinion, 1849

In spite of the century-long campaign against this turn of phrase consensus of opinion may still be found in well-edited and respectable publications, albeit with less frequency than it had previously enjoyed.

IGM has been trying to pose regular questions to a more or less balanced panel of well-regarded economists, so as to establish where a consensus of opinion more or less exists.
— Paul Krugman, The New York Times, 30 Jul. 2014

…and it will aim at a consensus of opinion, taking no particular stand on larger questions that animate scholars of race and black history, including perhaps the most fundamental: Is race a biologically meaningful category, or a cultural invention?
— Philip Kennicott, The Washington Post, 22 Sept. 2016

Now the general consensus of opinion around New York's Flushing Meadows is that with Ivan Lendl back in his corner and his game in pristine condition, Murray is on course for a second US Open title to sit alongside that he won four years ago.
— Barry Flatman, The Times (London , Eng.), 27 Aug. 2016

Our usage guide advises that although consensus of opinion is not actually redundant, many nonetheless believe it is and your use of the phrase may run the risk of censure. If you're not one to heed the (albeit mistaken) consensus of opinion on this particular subject, you can rest assured that your position is defensible.