The History of 'Blackmail'

Many people lie awake at night, finding themselves unable to sleep, and, in that murky state between awake and not, revisit that unending series of questions that seem forever unanswered: "what was the greatest thing before sliced bread?" "what would have happened if I had run away to join the circus with Iphigenia?" and, of course, "where does the word blackmail come from?" While we may know the answer to the first two questions, professional ethics will not allow us to answer them. On the subject of blackmail, however, we may provide some information. 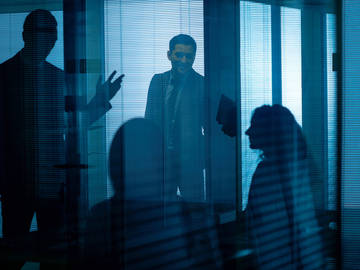 The original meaning of 'blackmail' was “a tribute anciently exacted on the Scottish border by plundering chiefs in exchange for immunity from pillage."

Did it come from an arcane custom of sending a threatening letter in a black-tinged envelope, in order to indicate to the addressee that woeful betidings awaited them if they did not comport with the instructions of the letter? No. The word does indeed come from mail, but it is not quite the same word that serves as the basis for email. In the 16th century, when blackmail first began being used, the mail in question was used chiefly in Scotland, and had the meaning of “payment” or “rent” (this word is thought to have come to Old English from the Old Norse word māl, meaning “speech, agreement”).

The original meaning of blackmail was “a tribute anciently exacted on the Scottish border by plundering chiefs in exchange for immunity from pillage,” a sense that it retained as its primary one for over two hundred years.

The taking of black-mail, is a kind of Concussion in our Law, and by black-mail is understood, the paying of money, or any gratuity to thieves, for their protection, and by our Law not only the takers but the payers of black-mail, are punishable as thieves and Robbers.
—George MacKenzie, The Laws and Customes of Scotland, 1678

Although blackmail was originally used to refer to something that was done to farmers who lived on or near the border of Scotland and England, it proved to be too useful a word to be bound by such geographic constraints, and soon came to be used in reference to money extracted in exchange for protection in other locales. It was not until the middle of the 19th century that the word began to be used as a verb, sometimes with the simple meaning of “to extort,” and other times with the more nuanced meaning of “to extort money or anything of value from (a person) by threats especially of subjecting the person to criminal prosecution or revealing information that could damage the person's reputation.”

As then, we now go against a high and oppressive system of taxation, called a “Protective Tariff,” by which one section is robbed to benefit another—agriculture and commerce blackmailed to feed and pamper a few lordly and tyrannical manufacturers.
—The Evening Post (New York City, NY), 7 Mar. 1844

The public, or rather that portion of it smitten with the California fever, should be extremely cautious about receiving such rumors, as I understand from a perfectly reliable source that one of the leading (?) morning papers was actually “black mailed” to circulate such stories by some interested shipping merchants.
—The Hartford Daily Courant (Hartford, CT), 1 Feb. 1849

It will thus be seen that … no desire is felt to use that mode of Telegraphing on any lines “South of the Ohio” towards Nashville and New-Orleans—however willing the subscriber had been always to fulfill contracts (but not to be blackmailed into higher terms) for the use of Morse’s Plan, as far as that plan has been used northward of the Ohio.
—The Tennessean (Nashville, TN), 2 Feb. 1848

While the sense of blackmail indicating I’m-going-to-tell-your-parents-if-you-don’t-give-me-that-candy is perhaps more recent than many might assume, the use of the word in conjunction with emotional is older than one many might imagine, dating back more than a hundred years.

There is none of that other family feeling which is expressed in recriminations at the table and in that other form of emotional blackmail, “Do it for mother’s sake. Peter.”
—The Oakland Tribune, 6 May 1917

And she will not use her death sentence as emotional blackmail to stop the elopement of Lois.
—Alan Bott, The Tatler (London, UK), 16 Nov. 1932

If you are unfortunate enough to find yourself subjected to blackmail, this information will, sad to say, not be of any great succor to you. But knowing it does mean that when you are in bed tossing and turning in your insomnolence you can turn your attention to those other questions that bedevil you.

And yes, you would have been very happy had you run away to join the circus with Iphigenia.