A mistake that stuck

Lexicographers are often asked questions when we meet with members of the general public. Questions such as ‘What is it like to have the third most glamorous job in Massachusetts?’ ‘What is a lexicographer?’ and ‘How do you decide when to put a new meaning of a word in the dictionary?’ The answers to the first two questions are, as you might expect, closely guarded trade secrets, but we are happy to provide an answer, of sorts, for the last. 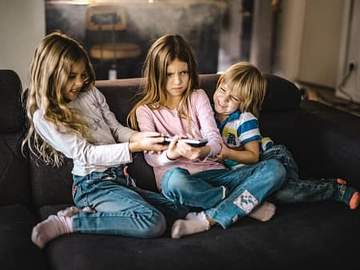 "Kids, no slaughter in the TV room."

One of the ways we decide to add a new definition for a word is when enough people use it in a specific sense with a specific meaning. This is why there is the definition of literally that proves so vexatious (“in effect; virtually”); many people have used the word in this manner for a very long time, and so we follow our mandate of keeping track of the language as it is used. We do not enter this sense because we love the sound of gnashing teeth. (We do, but that's beside the point.) In addition to this, every once in a while lexicographers will employ a different method for deciding when to enter a new sense of a word: the time-honored practice of ‘oops … well, too late to change it now.’ This is what happened with internecine.

How 'Internecine' Was Added to the Dictionary

The most commonly used sense of internecine found today (“of, relating to, or involving conflict within a group”) was introduced into our language through the mistake of a dictionary maker. Relax, as it was not from us; it was introduced by the great lexicographer Samuel Johnson, in his 1755 A Dictionary of the English Language. The word had been in use for about a century prior to Johnson’s dictionary, and the original meaning was simply “marked by slaughter.”

How bloudy were the persecutions raised against the Waldenses, in which there was no mercy shewed to any age, sex, condition, their rage extended it self to the destruction of the bruitish beasts, and senslesse trees? what internecine wars were stirred up against the Hussites in Bohemia?
— James Cranford, The teares of Ireland, 1642

…yet they commend revenge, and applaud that internecine hatred which concludes in nothing but blood, and therefore represent their greatest Heroes, such as Achilles and Aeneas and Alexander, as desiring only to live till they might throughly revenge the fair deaths of their friends….
— Luke Milbourne, Mysteries in religion vindicated, 1692

The latter portion of this word comes from the Latin necare (“to kill”), which is itself from nex (“violent death”). One possibility is that when Johnson came across internecine he assumed that the inter- prefix meant “between” or “mutual,” and so reasoned, reasonably enough, that putting the two together would yield a word meaning, as he phrased it, “endeavouring mutual destruction.”

Inter- has a number of possible meanings, most of which are closely related (such as ”between,” “reciprocal,” “shared by,” and “within”), and which would match Johnson’s definition. However, in Latin the root could also denote the completion of an action, which is how it was used in internecare, the Latin predecessor of internecine. It didn’t take long for other lexicographers to add this new sense of the word. John Ash included it in his 1775 The new and complete dictionary of the English language; Noah Webster omitted it in the 1828 edition of his dictionary, but it was included in the 1864 edition. By the end of the 19th century the Johnsonian sense of the word had eclipsed the original, ‘correct,’ meaning.

You should not view this as a cautionary tale; it is not intended to cast doubt on the accuracy of Samuel Johnson, or any other lexicographer. Johnson’s mistaken definition for internecine does not appear to have caused any lasting damage to our language. If anything, it serves as a reminder of just another way in which a healthy language can continue to grow and add new meanings.