Is there a difference between ‘instinctive’ and ‘instinctual?

Sometimes it’s best to go with your gut.

The adjectives instinctive and instinctual are very similar and used similarly in many contexts. As such, their definitions also have a lot in common.

Instinctive is defined as “of, relating to, or being instinct” and “prompted by natural instinct or propensity : arising spontaneously.”

Instinctual is shown as an undefined run-on at instinct in Merriam-Webster Online. In Merriam-Webster Unabridged it has its own entry and definition: “of, relating to, or based on instincts,” with the examples “instinctual behavior” and “the instinctual society of social insects.” 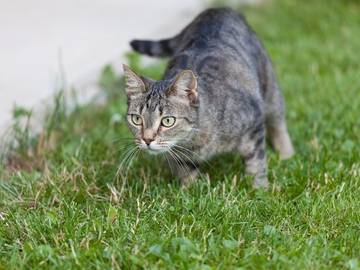 'Instinctual' tends to appear in writings on the science of evolutionary instinct.

Some older or more conservative usage commentators find the words to be virtually synonymous, and say that instinctive fills all needs where instinctual might be considered. The grammarian H. W. Fowler, in Modern English Usage, called instinctual a "superfluous word": "Why anyone should have thought it necessary to coin a new one on the analogy of contractual, habitual, etc., is not clear; perhaps the psychologists wanted an adjective of their own."

It is notable that Fowler is inclined to attribute instinctual to psychologists. There’s nothing in historical evidence to suggest that psychologists are responsible for coining the word. The earliest citation given in the OED comes not from scientific writing but a 1924 novel by Gilbert Knox (pseudonym of the Canadian author Madge Macbeth).

But instinctual does tend to appear in writings pertaining to the science of evolutionary instinct. A person writing from a scientific background might be more liable than a layperson to see a distinction in use between instinctive and instinctual, and more critically, might be inclined to see a need for such a distinction.

That may be why more recent commentators do see a distinction between the two: namely, that instinctive describes something (as an action) done or controlled by one’s instincts:

All at once, with an instinctive quickening of her senses, Kit knew that she was not alone, that someone was very close.
— Elizabeth George Speare, The Witch of Blackbird Pond, 1958

This was not a slip of memory in the heat of debate. This was dishonest, a repeated misrepresentation, in the interests of claiming power, so bald and so systematic that the only instinctive response (Did too!) was that of the schoolyard.
— Joan Didion, The New York Review of Books, 5 Oct. 2006

Instinctual, on the other hand, tends to be used in contexts where it means “relating to instinct,” describing not specific behaviors but the notion of behavior itself. For that reason instinctual tends to be used more in scientific writing:

Such inevitability is the mark of instinctual behavior in any species, which is guided toward certain states by emotion-driven rules of mental development.
— E. O. Wilson, The Atlantic, April 1998

If you find yourself needing to choose between instinctive and instinctual, your best bet might be to trust your instincts.