'Ingenious' and 'Ingenuous': More Than a Typo

The adjectives ingenious and ingenuous differ by one letter, and their differing letters are next to each other on the QWERTY keyboard, making typos that confuse them easy. But typos aside, people genuinely confuse the meanings of the words as well. 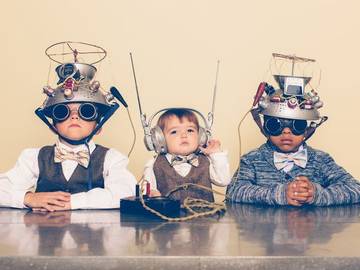 'Ingenious' may have a lot in common with 'genius,' but the two words aren't etymologically connected.

How to Use 'Ingenious'

Ingenious typically describes people who come up with clever ideas or solutions, or the ideas or solutions clever people come up with. It is defined as “having or showing an unusual aptitude for discovering, inventing, or contriving" and “marked by originality, resourcefulness, and cleverness in conception or execution.” The word comes via Middle English and Middle French from the Latin ingenium, which also gave us engine, a word that originally meant “ingenuity.”

By the time the bike was perfected, around 1885, it was already an anachronism: the steam locomotive had been invented decades earlier and the automotive revolution was beginning to stir. But the bicycle was such an ingenious device that it didn’t matter that it was, in a way, behind-the-times at birth. It used basic materials and a spartan design—that simple arrangement of wheels and pedals and cranks and a chain—to harness human muscle power in an incredibly efficient way.
— Jody Rosen, quoted in The Dallas Morning News, 26 May 2022

Say the word ingenious and you clearly hear the word genius within it, which seems apt, as we apply genius to someone who possesses extraordinary intellect or has a strong aptitude for something (“she’s a genius at fixing computers”). Geniuses certainly might come up with ingenious ideas, but there’s no etymological relationship between the words. Genius originally referred to an attendant spirit and comes from the Latin verb gignere (“to beget”).

How to Use 'Ingenuous'

Ingenuous means “showing innocent or childlike simplicity and candidness” or “lacking craft or subtlety.” It describes one who, like an innocent child, doesn't have the intent to deceive another.

Gap-toothed and puckish, Morse brought an ingenuous quality to the roles he played that made even characters who bordered on the morally dubious seem sympathetic.
— The Daily Telegraph (London), 22 Apr. 2022

On occasion we see these two words juxtaposed and contrasted to highlight their distinction:

Permission to be wrong, wedded with a responsibility to be right, creates a powerful, civilizing tension. We are a species ingenious enough to project our intellect out across the universe, and ingenuous enough to feel awe at the spectacles the sky still offers at home.
— Jeffrey Kluger, Time.com, 15 Aug. 2017

One might see in ingenuous the word ingenue, which nowadays is sometimes used for a young female actress or performer but originally referred to a naïve girl or woman. Ingenuous sounds like it should be the opposite of genuine, but the in- prefix here means “in-" or “within” and is not the negating prefix found in inconvenient or inconclusive. Ingenuous itself gets negated as disingenuous, which means “calculating” or “lacking in candor”; disingenuous is somewhat more common than its antonym.

The pair of ingenious and ingenuous wasn't always so neatly distinguished: there was a time when they were used synonymously, that time mostly being restricted to the 16th through 18th centuries. Samuel Johnson’s 1755 dictionary did not recognize them as synonyms, though, and such usage had fallen out of favor by the end of the 18th century. So even if you feel like you're being ingenious by now using them in this creative and once historically-supported way, most people will probably see it as a mistake.