Because books lead to blogs that lead to tweets.

We live in the Information Age: that modern era in which information has become a commodity disseminated instantly and all over. We've got a glut, and still we want more. There was a time (a very long time ago) when you could read all the books. Now it's impossible to read even all the books published last month. And putting the books aside, there are magazines and journals and newspapers to read. And there are blogs and essays and listicles and memes. And beyond information to read, there are radio programs and podcasts to listen to, and movies and documentaries to watch. 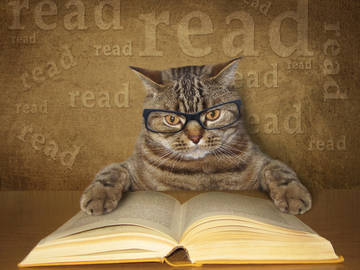 Even with that speed reading class, you can't finish them all.

We are, it seems, stuffed to the gills with information and yet we seek ever more. There must be a name for that, right? Yes. There must be, and there is: infomania. Its form is obvious: the info is a truncated form of information, and the mania part, which traces back to the Greek word mainesthai, meaning "to be mad," is the marker of obsessiveness and excessiveness in terms like kleptomania and pyromania. Infomania is the obsessive—and often excessive—consumption of news and information.

The word was possibly born twice1, as some words are. Journalist and writer Elizabeth Ferrarini published Confessions of an Infomaniac as day was breaking over the Information Age in 1984 (a working title of Infomania is mentioned in a 1983 InfoWorld article about Ferrarini's work). While the book apparently (our office copy hasn't arrived yet) discusses such pedestrian topics as banking and job-searching online, the buzz about it before and after publication concerned the author's recounted experiences with online dating on services like The Source and Compuserve. This particular content suggests that the title choice might have been a wink at the word's most famous rhyming relative, nymphomaniac, but the allusion looks to be nothing more than that. In both Confessions of an Infomaniac and the book that followed it in 1985, Infomania: The Guide to Essential Electronic Services, Ferrarini seems to be using the word to focus the reader on how daunting the Internet can be so that she can present guidance on navigating its shoals.

It's not clear if British philosopher Michael Heim was aware of Ferrarini's books when his essay ran in The Independent in December 1989 with the title "The Dark Language of Infomania," a short time before it appeared in a collection of essays called The State of the Language. Heim's essay was a jeremiad against computers with a particular focus on word processing. Heim's focus on word processing can seem quaint today: the processing of words with a computer rather than with a typewriter or pen or quill or whatever they used in the late 1980s—it's hard to remember—is as commonplace and unremarkable as toothpaste; yes, we no longer dab our wet toothbrushes into little jars of baking soda. We're mostly all OK with that.

And yet, Heim's articulation of the effect computers and, yes, in particular word processing can have are prescient, and his description of the life of the infomaniac eerily recognizable:

For us, significant language always depends on the felt context of our own limited experience. We are biologically finite in what we can attend to meaningfully. When we pay attention to the significance of something, we cannot proceed at the computer's breakneck pace. We have to ponder, reflect, contemplate. Infomania erodes our capacity for significance. With a mindset fixed on information, the attention span shortens. We collect fragments. We become mentally poorer in overall meaning. We get into the habit of clinging to knowledge bits and lose our feel for the wisdom behind knowledge. In the Information Age some people even believe that literacy or culture is a matter of having the right facts at our fingertips.

Heim's words are mirrored by current discussions of the term. But between then and now, infomania lay pretty quiet for a couple decades, never dropping completely from use, but not being used in mainstream media with any frequency. Then in 2005 a study sponsored by Hewlett-Packard brought the word back to the public's attention. News coverage mostly framed the study's findings with this eyebrow-raising clickbait: infomania costs modern media consumers more IQ points than what the stoners pay for their chosen habit.

The study was imperfect at best and even more imperfectly reported, but it reintroduced English speakers to a word for a phenomenon that had in the intervening decades become an integral and inextricable part of the lives of millions.

Since that study, we've been seeing infomania gaining wider use. It's not yet as ubiquitous as toothpaste, but you're likely to encounter it more and more, which means we're watching it ever more closely.

1Or possibly three times: The Oxford English Dictionary reports that Infomania appears as a heading above a list of reference book titles in The Washington Post in 1975. The meaning of the word in that context, however, does not appear to us to be the same as the one under discussion here.