'Tis the (Flu) Season: The History of ‘Influenza’

The stars aligned just so you could feel miserable.

Flu is short for influenza, which comes from an Italian (and Medieval Latin) word meaning "influence." At one point the effect of the flu was believed to be caused by the influence of the stars. The first influenza pandemic occurred around 1580, and the second in 1743, the latter spreading from Rome to England and introducing the word flu to the English.

Most medical professionals consider flu season to align with the colder months of fall into winter, sometimes stretching into the beginning of spring. (That works out to about one-half of the calendar year, if you are keeping track.) That’s why you see pharmacies and clinics offer flu shots as early as September in many places. It’s also why you might hear your co-worker hacking up a lung over there in her cubicle because she showed up for work despite repeated pleas to stay home, and just what kind of point do you think you’re proving, Cheryl? 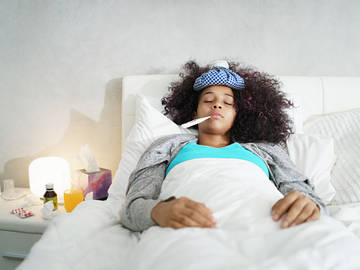 'Flu' is Short for 'Influenza'

Many people know that flu is short for influenza and covers the same range of illnesses that influenza denotes: an acute respiratory disease that is highly contagious and is caused by one of three orthomyxoviruses. The symptons are numerous and familiar: inflammation of the mucous membranes, fever, aches, chills, cough, snotty tissues, Netflix binging, self-pity, and despair.

All of the great (read: notorious) illnesses seem to start with a definite article: the plague, the measles, the clap. Flu is no exception, appearing with the in its earliest English uses in the first half of the 19th century, about 100 years after the longer form entered English:

Influenza comes to English from Italian, where it derived from the Medieval Latin word influentia. Both etyma translate to “influence” in their respective languages, an allusion to how the disease was traditionally attributed to the influence of the stars. According to the Centers for Disease Control, the first known influenza pandemic struck in 1580. Another epidemic of the disease originated from Rome in 1743, spreading throughout much of Europe and bringing the word to the British Isles.

Flu (spelled originally as flue, as seen above) excises the second syllable of the word. The French, on the other hand, referred to influenza as grippe, from that language’s word for “seizure.” Use of grippe in English tends to be considered old-fashioned nowadays but survives in literature from the beginning of the 20th century:

There came pneumonia and grippe, stalking among them, seeking for weakened constitutions; there was the annual harvest of those whom tuberculosis had been dragging down.
— Upton Sinclair, The Jungle, 1906