A trending word even we had to look up

Late last month the word pasquinade popped to the top of the most frequently looked-up word list. The explanation for the flurry of look-ups was the word's appearance in an opinion piece by Charles Cooke lamenting the poor performance of Sarah Palin at a recent political event on Iowa. Cooke ends his column saying that Palin has "collapse[d] into ignominious pasquinade." 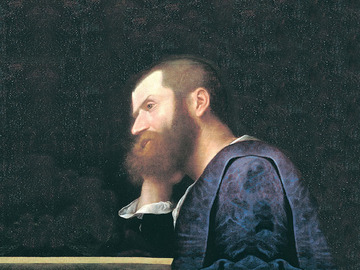 We'll admit it. Pasquinade is not part of our working vocabulary, so we had to look it up. Our dictionary defines it as "a lampoon posted in a public place" and as "satirical writing, satire." Fair enough, but it was the etymology that caught our eye:

Middle French, from Italian pasquinata, from Pasquino, name given to a statue in Rome on which lampoons were posted

Yes, Pasquino was the popular name for the remains of an ancient Roman statue unearthed in Rome in 1501. The statue was supposedly named after a local shopkeeper whose house or shop was near where the statue was found. And there was a custom that anonymous satirists would attach highly critical political passages to the torso of the statue. These pasquinades, some by important 16th-century writers, such as Pietro Aretino, were then collected and published. 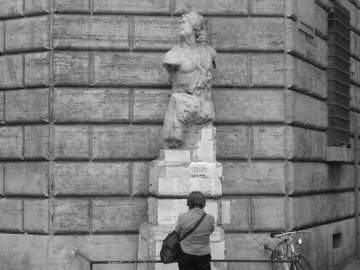 A word about this Pietro Aretino fellow, courtesy of Encyclopaedia Britannica: He was born in the town of Arezzo, in the Republic of Florence, in 1492. He was the son of a shoemaker, but he later pretended to be the natural son of a nobleman and derived his adopted name ("the Aretine") from his native city. He moved to Rome in 1517 and wrote a series of viciously satirical lampoons supporting the candidacy of Giulio de' Medici. Perhaps partially as a result, Giulio became Pope Clement VII in 1523, but despite the support of the pope, Aretino was forced to leave Rome because of his general notoriety and his 1524 collection of Sonetti lussuriosi ("Lewd Sonnets"). From Rome he went to Venice, where he was the object of great adulation, became friends with the painter Titian, for whom he sold many paintings to the King of France, and lived in a grand and dissolute style for the rest of his life.

We're a long way from Iowa at this point, but we can get one more stop on this trip if we ask the question, Can pasquinade also be used as a verb? Yes, it can, at least according to Merriam-Webster Unabridged. It means "to lampoon" or "to satirize." As an example of this use, the Unabridged offers a brief snippet from Edgar Allen Poe's short story "The Murders in the Rue Morgue." Here's the context: The narrator and his companion are walking the streets of Paris and end up discussing an actor named Chantilly. The narrator explains:

Chantilly was a quondam cobbler of the Rue St. Denis, who, becoming stage-mad, had attempted the rôle of Xerxes, in Crébillon's tragedy so called, and been notoriously Pasquinaded for his pains.

Try that one out on your friends.

By the way, Cooke's essay also includes the word ressentiment, meaning "deep-seated resentment, frustration, and hostility accompanied by a sense of being powerless to express these feelings directly." That's another word that seems well worth looking up, but far fewer people did so. Maybe they got as distracted as we did in the story of pasquinade.