The Origin of 'Hypocrite'

This common word has a dramatic origin story

A number of different things might pop to mind when we hear the word hypocrite. Maybe it’s a politician caught in a scandal; maybe it’s a religious leader doing something counter to their creed; maybe it’s a scheming and conniving character featured in soap operas. But it’s likely that the one thing that doesn’t come to mind is the theater. 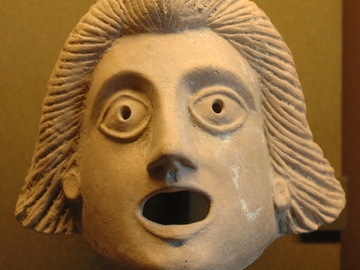 A theatrical mask from the 1st century B.C.E. 'Hypocrite' comes from the Greek word 'hypokrites', which means "an actor."

The word hypocrite ultimately came into English from the Greek word hypokrites, which means “an actor” or “a stage player.” The Greek word itself is a compound noun: it’s made up of two Greek words that literally translate as “an interpreter from underneath.” That bizarre compound makes more sense when you know that the actors in ancient Greek theater wore large masks to mark which character they were playing, and so they interpreted the story from underneath their masks.

The Greek word took on an extended meaning to refer to any person who was wearing a figurative mask and pretending to be someone or something they were not. This sense was taken into medieval French and then into English, where it showed up with its earlier spelling, ypocrite, in 13th-century religious texts to refer to someone who pretends to be morally good or pious in order to deceive others. (Hypocrite gained its initial h- by the 16th century.)

It took a surprisingly long time for hypocrite to gain its more general meaning that we use today: “a person who acts in contradiction to his or her stated beliefs or feelings.” Our first citations for this use are from the early 1700s, nearly 500 years after hypocrite first stepped onto English’s stage.