You can do both, but they're not the same

Indistinguishable in speech, the words hurtle and hurdle can be a confusing pair. Here's the scoop on both. 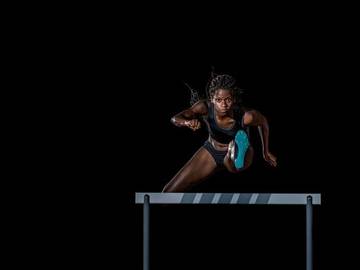 You jump over a 'hurdle.' The planet 'hurtles' through the cosmos.

Hurdle has several different meanings as a noun. The word originally—that is, way back before the 12th century—referred to one of a set of portable panels that you'd put around land or livestock. It's this hurdle that in the 19th century gave us the kind of hurdle we're familiar with runners jumping over in track events. (In the intervening years, a more sinister meaning of the word was also in use: from the early 15th century until well past the midpoint of the 19th, traitors in England were dragged to their execution on a frame or sled referred to as a hurdle. Yikes.)

Hurdle isn't just a noun, though. It's a verb with two meanings, one of which relates directly to the hurdles of track and field: "to leap over especially while running," as in "hurdling a fence." From that late 19th century meaning came an extended figurative use of "overcome" or "surmount," as in "hurdling adversity." The verb hurdle is always transitive; that is, there's always a thing being hurdled, whether it be a physical obstacle or a metaphorical one.

Then, in a brilliant display of racing strategy and guts, [Emma] Coburn took the inside lane over the penultimate barrier and came out of the turn in the lead. She then sprinted down the home stretch, lightly hurdled the final barrier and powered home with arms upraised to earn the World Championship gold medal.
— Mike Sandrock, The Daily Camera (Boulder, Colorado), 10 Dec. 2017

The word hurtle, on the other hand, can be either a noun ("an act of hurtling") as well as a transitive or intransitive verb. The verb has two meanings: "to move rapidly or forcefully," as in "a stone hurtling through the air," and "to hurl or fling," as in "hurtling the stone into the air."

SpaceShipTwo holds six passengers, who have each paid $250,000 per ticket. The ship is carried by airplane to high altitudes before its rocket fires, hurtling the craft into space and allowing the passengers to float around weightless before descending to land on a runway.
— Alex Knapp, Forbes, 18 June 2014

To remember which word you want, remember this: if you're going to hurdle, you need to be literally or figuratively leaping over something.