How the Ukulele Got Its Name

It's likely an insect was (inadvertently) involved

At some point the ukulele (also less commonly spelled ukelele) morphed from the charming but relatively obscure instrument that Tiny Tim used to accompany himself while he tiptoed through the tulips to the still-charming but also ubiquitous accessory of hip musicians (and nonmusicians—it's famously easy to learn) everywhere. You could say that the ukulele is having a moment. Except that most moments don't go on for a decade and a half. 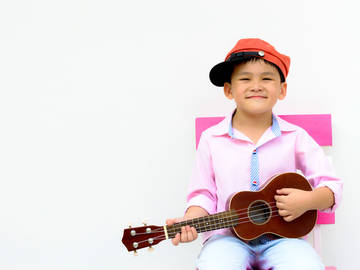 Sometimes, the most colorful etymology is actually the most likely one. Such is the case with 'ukulele'.

But while the ukulele as a trend has been widely covered, not terribly much has been said about the word ukulele. As your dictionary, we're here to fix that.

It will surprise no one that the word ukulele is Hawaiian in origin; the instrument is associated with the Hawaiian archipelago about as strongly as a Hawaiian vacation is associated with envy. But the ukulele itself is not from Hawaii. It was brought there by Portuguese immigrants who called it a machete. The instrument was embraced in its new home, and was a particular favorite of an official in the court of King Kalakaua, a former British army officer named Edward Purvis. Purvis was a sprightly, lively fellow, and rather petite. These qualities had at some point earned him a nickname that translates as "jumping flea." In Hawaiian, the word is ukulele (from ʽuku, "flea," and lele, "jumping"). Mr. Ukulele became so closely associated with the instrument that his nickname became the name by which the instrument was known.

So goes the story favored by our etymologists. It's not, though, the only story out there. Another is that the fingers of a skilled ukulele player move rapidly in a way reminiscent of a jumping flea. And another is that the word is unrelated to bloodsucking insects and instead comes from a different Hawaiian word ukulele that translates to "the gift that came here," from uku (distinct from ʽuku), meaning "gift or reward," and lele, meaning (in addition to "jumping") "to come." That most lovely of the theories is said to have come from Queen Liliuokalani—Hawaii's last monarch—herself, though the story of Purvis remains the most probable.