Spam. A Lot of Spam.

How Spam Became Something On Your Phone, Not On Your Plate 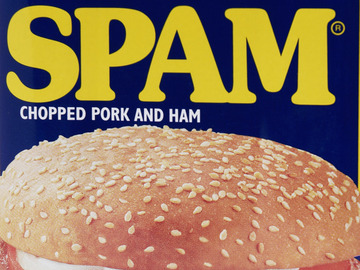 Just about every time you open your email, you are confronted with the 21st-century equivalent of junk mail: spam. Delete it and move on, but you might want to take a moment to ponder why we call it spam.

Spam is actually a trade name for the cooked, canned meat product that Hormel Foods has been making since 1937 (the name comes from "SPiced Ham"). Shelf-stable and packaged in a sturdy tin, Spam was included as part of the rations sent to soldiers in World War II. Since then, Spam has enjoyed some measure of popularity (or infamy, depending on your feelings regarding cooked, canned meat products), appearing in stores and menus around the world.

That near ubiquity was the pivot that allowed the word spam to go from referring to canned meat to canned mail. Back in 1970, an episode of the famed British comedy show Monty Python's Flying Circus aired a sketch featuring Vikings enthusiastically chanting the name of their favorite cooked, canned meat product:

A couple stops at a diner that has copious amounts of Spam on the menu, and that also happens to be populated with Vikings. Whenever the waitress mentions a dish with Spam in it, the Vikings begin to chant, and then sing enthusiastically, the name of the cooked, canned meat product, completely drowning out the other dialogue in the sketch.

Fast forward to the 1990s, where the unrelenting solicitations that popped up on Usenet reminded early Internet users of the Viking song in that sketch. In 1994, the publication Network World described unwanted solicitations on Usenet groups as a "spam attack," thereby introducing the annoying electronic type of spam to a broader audience.

As you might expect, Hormel is not happy that the name of its gelatinous meat is now inextricably linked with something that most people find an inconvenience at best, but in recent years it’s tried to make the best of its various associations. In 2005, for instance, the company helped promote the Broadway musical Spamalot, written by none other than Monty Python’s Eric Idle.