How Do You Pronounce 'The'?

Let us count the ways. With apologies to Elizabeth Barrett Browning.

There are two ways to pronounce that essential and rightfully-ubiquitous word, the. Despite their good intentions, those who say that it must always be rhymed with me and tree are flat-out wrong. And those who say that its pronunciation has something to do with verbs and nouns are likewise misinformed. 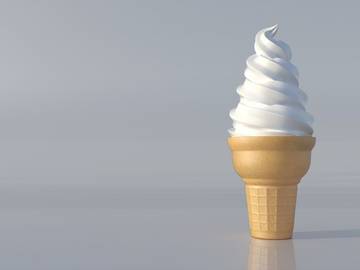 Pictured: the (rhyming with 'me') ice cream cone you deserve for reading good content.

Here are the facts: the standard way the word is pronounced has to do with what follows it. If the word that follows it begins with a consonant sound, then it's pronounced \t͟hə\—that is, with the same vowel sound as the word of—and it is unstressed:

the one (note that although "o" is a vowel, the word one begins with the sound usually made by "w," a consonant)

If the word that follows it begins with a vowel sound, the is usually pronounced \t͟hē\ (to rhyme with me), but is also sometimes pronounced \t͟hə\, as above. Again, it is unstressed:

Occasionally the is stressed, for instance to provide emphasis, or before a long pause. In those cases it's pronounced \t͟hē\:

the one and only

the queen of hip-hop

If you're a native speaker of English, this information only confirms what you've been hearing and likely doing all your life. And as linguist Mark Liberman points out at Language Log (a group blog about all things linguistic), what we hear today is what our grandparents heard all their lives, and their grandparents before them, in both American and British English. And they had to hear it while walking uphill, both ways, in the snow.