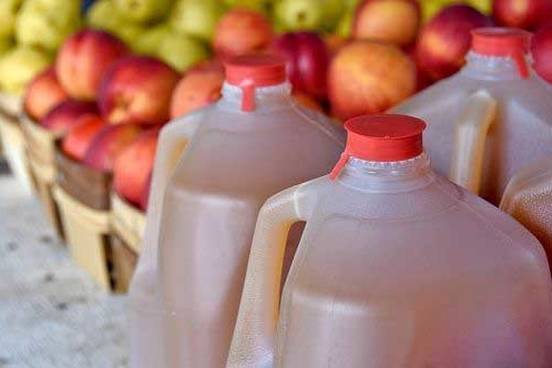 noun 1 : fermented apple juice often made sparkling by carbonation or fermentation in a sealed container 2 : the expressed juice of fruit (such as apples) used as a beverage or for making other products (such as applejack)

In Middle English, the forms sider, sedyr, and cidre all referred to what we now call "cider" (specifically hard cider) or to alcoholic drink generally, as referenced in Biblical translations and related works. English got the word from Anglo-French, the particular kind of French used in medieval England. The Latin ancestor of the French word is sīcera, meaning "alcoholic drink"; sīcera and its lexical offspring likely referred to the fermented juice of apples (and other fruits) found in monasteries, and particularly in monasteries in areas of Europe that were not wine-producing.

The modern word cider dates to the 13th century and originally referred only to the fermented kind. When the non-fermented kind of cider became popular, the term hard cider was required to differentiate the two, making it a proper retronym that dates back to the late 18th century. 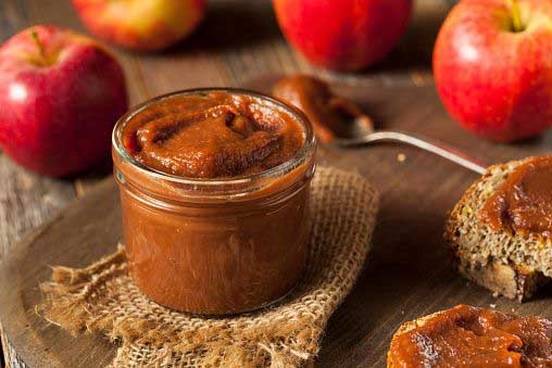 noun : a thick brown spread made by cooking apples with sugar and spices usually in cider

The term apple butter dates only to the early 19th century, making it a relatively recent addition to the language.

The only entry for apple butter in the 1888/89 Cassell's Dictionary of Cookery is under the heading "Apple Butter, American." The recipe is what you'd expect, given the definition above. You take peeled, cored, quartered apples and add some spices; cover it all with cider and boil till what's left is a jammy deliciousness, that's thick like butter. The recipe reports that apple butter "makes an excellent substitute for butter, and is very wholesome for children." 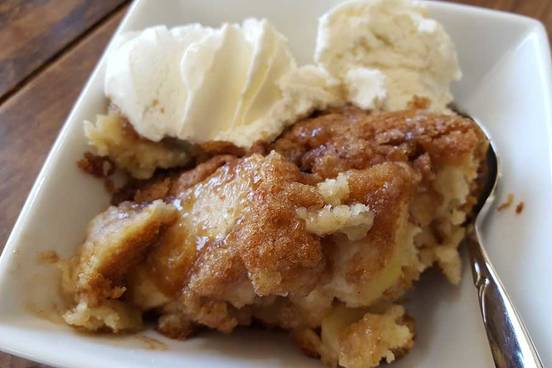 noun : a dessert made with apples and pie crust especially : a deep-dish apple pie

The Dictionary of American Regional English places the map tack for apple grunt on the curved arm of land that sweeps into the Atlantic at the southeastern corner of Massachusetts, with some smattering of examples of the term in use outside Cape Cod. Apple grunt isn't the only sweet grunt. One definition for grunt in this dictionary is "a dessert made by dropping biscuit dough on top of boiling berries and steaming." 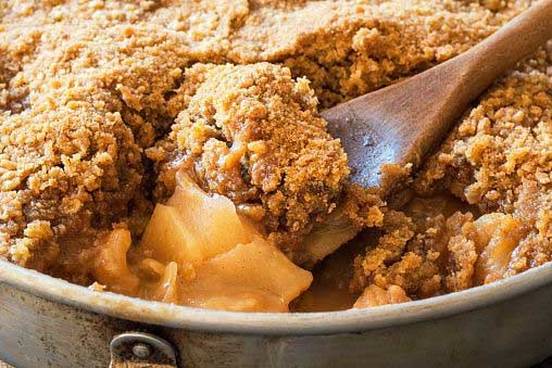 noun : a baked pudding of apples, bread crumbs, and spices

Betty, a nickname for Elizabeth, appears to have first lent its name to a dessert in the mid-19th century in the form of brown Betty. Other desserts followed: the term Betty can refer broadly to a dessert made of alternate layers of fruit and buttered crumbs, sugar, and spices baked in a baking dish or in individual dishes—a cranberry Betty, for example—or it can refer narrowly to an appley brown Betty. 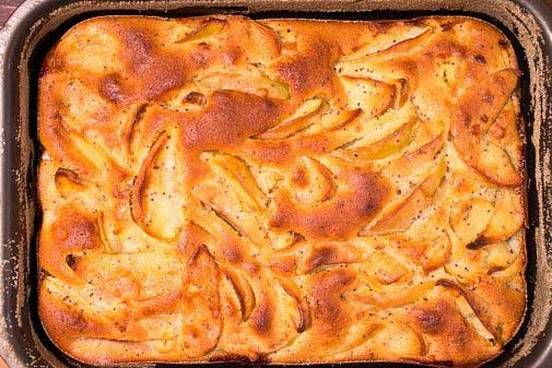 noun : a deep-dish spiced apple dessert sweetened with sugar, molasses, or maple syrup and covered with a rich crust

The crust in a pandowdy is generally not considered to be particularly Instagram-worthy. Although the origin of pandowdy is unknown, many have asserted that it earned its "dowdy" element by its less than attractive top layer. Some recipes instruct the cook to mutilate the crust as part of the preparation process, chopping it up partway through the baking (or after baking) so that it soaks into the fruity filling. The many pandowdy enthusiasts over the two centuries since term was coined have, however, not all agreed to a single recipe, and just how dowdy the dish that is presented looks is in the eye of the beholder. 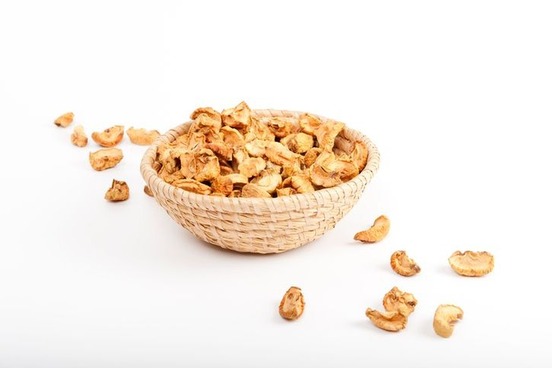 noun : a dish consisting of dried apples and dumplings boiled with or without smoked ham

We can thank Pennsylvania German (also known as Pennsylvania Dutch) for the delightfully evocative schnitz and knepp. It traces back to two older words, both Middle High German—that is, the German native to central and southern Germany as used between 1100 and 1500: sniz, meaning "slice, cut," and knopp, meaning "button, lump." 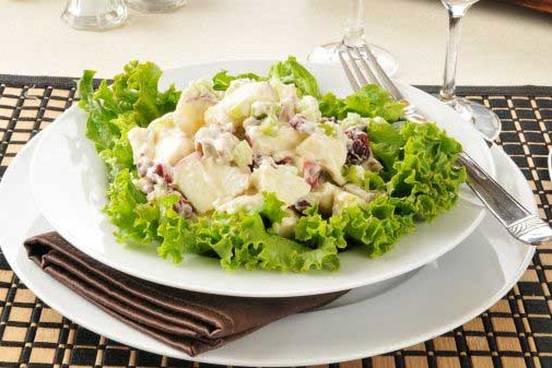 noun : a salad made typically of diced apples, celery, nuts, and mayonnaise

The invention of the Waldorf salad is credited to the man who served as maître d' of the Waldorf hotel for fifty years, one Oscar Tschirky. His 1896 cookbook, The Cook Book by "Oscar of the Waldorf" presents the following under "Waldorf Salad":

Peel two raw apples and cut them into small pieces, say about half an inch square, also cut some celery the same way, and mix it with the apple. Be very careful not to let any seeds of the apples be mixed with it. The salad must be dressed with a good mayonnaise.

As it is with the coining of words, so it goes too with the creation of a recipe: the recipe becomes its own thing, and Waldorf salad is now commonly made with nuts as well. 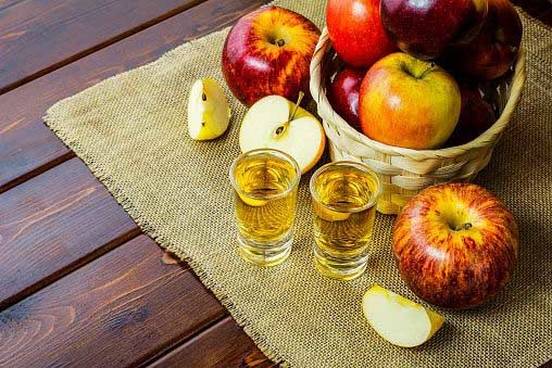 noun : brandy distilled from hard cider also : an alcoholic beverage traditionally made by freezing hard cider and siphoning off the concentrated liquor

We don't know if there's a particular Jack behind the word applejack, but if there ever was, that person is long dead. The word dates to the early 19th century. Applejack made anywhere but a particular part of France can be called simply "applejack." But if you make your applejack in Calvados, France, it's called calvados, as it has been since the early 20th century. 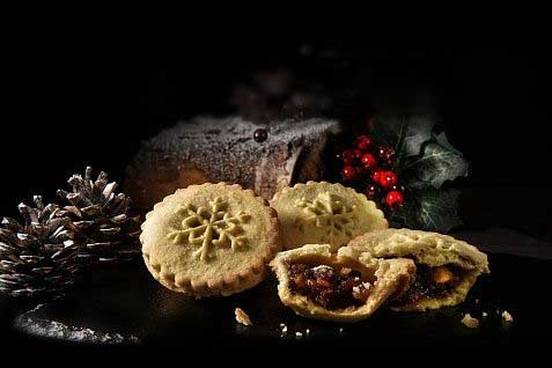 noun 1 : minced meat 2 : a finely chopped mixture (as of raisins, apples, and spices) sometimes with meat that is often used as pie filling 3 : a state of destruction or annihilation —used in the phrase make mincemeat of

When the word mincemeat was first used in the early 17th century, it referred, logically, to minced meat—that is, to meat that has been finely chopped. Two hundred years later, people started to use the word mincemeat to refer to a finely chopped mixture of other stuff, such as raisins and apples, too. Often minced meat was part of the "stuff," especially at first. Today, mincemeat, especially when it's used to modify pie, refers to a meatless mixture.

The phrase make mincemeat of is used to mean "to destroy, ruin, or defeat (someone or something) in a very thorough and complete way," which suggests something about the process by which literal mincemeat is made. 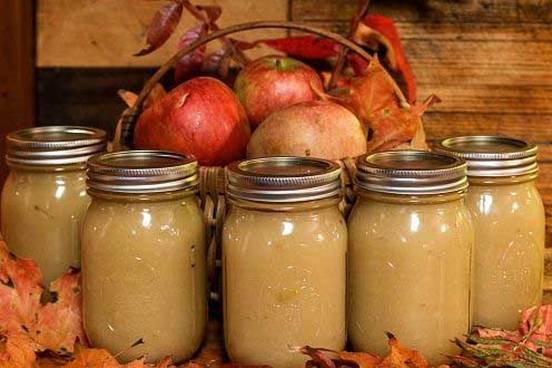 noun 1 : a relish or dessert made of apples stewed to a pulp and sweetened 2 slang : bunkum, nonsense

Of all the things one can make from apples, surely applesauce is the easiest. You just cook some apples till they're soft and mushy and sweeten a little. That meaning of applesauce dates to the late 17th century. A few centuries on, the word came to be used to mean "nonsense," which seems perhaps unfairly disparaging of the sweet soft goodness that is a well-made applesauce.