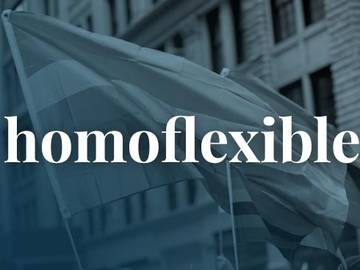 What do homoflexible and heteroflexible mean?

Where did homoflexible and heteroflexible come from?

The most common sense of the prefix homo- is "one and the same"—or, rather, "similar" or "alike"—and it is derived from Greek. This is the sense that forms homosexual, which, as an adjective, refers to sexual attraction to people of the same sex, and as a noun, to people having such an attraction. Both forms debut in the English language in the late 19th century.

In the early 20th century, homo (a shortening of homosexual) begins to be used as both an adjective and noun in disparaging meanings synonymous with its derivative. It is this word that is the source of the adjective homoflexible. In other words, homoflexible is not a prefix plus a base word but is a compound of the word homo ("homosexual") and the word flexible, whose sense relating to being willing to try different things dates to the 16th century. According to print evidence, the slangy homoflexible was formed in the early 21st century, and it is used to describe a person who is primarily attracted to those of the same sex but who is also sometimes attracted to the opposite sex.

The counter to homoflexible is heteroflexible, which first appears in college slang around the same time:

HOT TERM BEING BANDIED ABOUT ON CAMPUS: Heteroflexible—the condition of being not fully bisexual but open to adventure.
— The Buffalo (New York) News, 20 Dec. 2002

Like homo-, the prefix hetero-, meaning "other" or "different," is also from Greek. Similarly, the term heterosexual, which denotes sexual attraction to the opposite sex, also originated in the late 19th century in juxtaposition with homosexual. In the early 20th century, the shortened form hetero begins being used in reference to heterosexual attraction, and by mid-century it begins being used in reference to a heterosexual person. Like homoflexible, heteroflexible is derived from the shortening, not the prefix.

How are homoflexible and heteroflexible used?

Coeducational rooming can meet many needs. Some heterosexual students say it lets them live with their closest friends, regardless of gender. Some gay students express similar feelings, while others emphasize their happiness at avoiding a straight same-sex roommate. "I live with straight guys now, and I definitely see the sexual tensions, which have made me very uncomfortable," said one student, who described himself as "homoflexible" and asked not to be named because his parents are unaware of his sexual orientation. "I'm going to be much happier living with a girl than a guy. And I would never want to live with a guy I was dating."
— Tamar Lewin, The New York Times, 11 May 2002

Cait and Chris say they are bisexual while Matt defines himself as homoflexible, meaning he prefers men but is open to women.
— Charlie Moore, MailOnline, 20 Nov. 2017