Because one should not dine on bread alone

Companion is a familiar word for one that joins or accompanies another, whether on a journey ("a travelling companion") or in the journey of life ("married her longtime companion"). 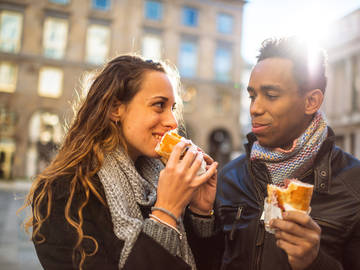 'Companion' comes from 'panis', the Latin word for bread. Originally, the word was used to describe someone with whom you shared a meal.

Of course, the word can be used of animal companions, too. Speaking to his horse, Rocinante, Don Quixote says:

And thou, O sage magician, whoever thou art, to whom it shall fall to be the chronicler of this wondrous history, forget not, I entreat thee, my good Rocinante, the constant companion of my ways and wanderings.

Companion derives from Middle English and Anglo-French from Late Latin companio. The com- in companion means "with." The second part comes from panis, the Latin word for bread or food. And in that root one sees the basis on which the notion of companionship originally hinged: a companion was a messmate, one with whom you took mess, or ate a meal.

Ralph Waldo Emerson made allusion to the origin of companion when he wrote on the subject of manners in 1844:

Panis gives us a number of other bread-related terms. It puts the pan- in panini, for example. Less commonly, the Latin phrase panis et circenses translates to bread and circuses, a somewhat derisive term for food and entertainment offered by a government to soothe public discontent.