The History of the Word 'Terrorism'

The words terrorism and terrorist came to English as translations of words used in French during the period known as the Reign of Terror (1793-94), when the new government punished—usually by death—those people thought to be against the ongoing French Revolution. It was a gruesome and protracted period of official state-sponsored violence that set the political tone for much of the use of these words ever since. 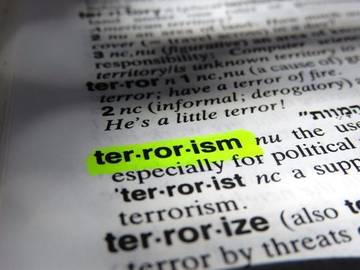 Its first definition was "a state of being terrified, or a state impressing terror."

Early examples of terrorism and terrorist in English come from familiar names from the American revolutionary period, all making clear reference to the French Reign of Terror:

And upon the latter occasion, when the party got possession of the Convention and began for a while to rule, and were about to reestablish terrorism and not royalty, the royalists shifted their ground in a moment and became very vociferous against popular commotions, and equally pathetic in support of the Convention and of the law, which a few hours before they disdained and endeavoured to subvert.
— Thomas Jefferson, 23 June 1795

In several parts of the South of France there are associations formed to assassinate the people denominated terrorists: that is the partizans of Robespierre’s dominion. The Convention have recently enacted a severe Law on this subject.
— John Quincy Adams, 6 July 1795

In this course the question universally propounded was who were terrorists, who were Jacobins, who were insurgents, anarchists &ca for all these terms were synonimous. Here the friends of the revolution were put upon the defensive, & the sword, not of justice, but of revenge, put in the hands of the royalists. You will readily conceive, that the imputation of terrorism was carried to the utmost extent whilst this state of things lasted.
— James Madison, 29 October 1795

An early reference to a generic terrorism—still meaning “violence perpetrated by a government,” but in this case not the French revolutionary government—comes from yet another of the Founders:

The Coercion of Terrorism, cannot be practiced in America, so easily as in Europe where the Issue of a Battle determines the Fate of a Nation and the Capture of a City involves the Submission a whole Country.
— John Adams, 4 January 1799

It seems that Jefferson was using the word in the same meaning in this next letter, in which he also presents his hope that the new American system of government would not employ the tactics he had witnessed in France:

Nothing will be spared on my part to harmonize our system, and to render the republican basis so solid as to defy the machinations of terrorism, illuminatism &c.
— Thomas Jefferson, 9 March 1801

From the famous correspondence between Jefferson and Adams conducted later in their lives, we see a shift in meaning of terrorism from violence perpetrated by a government to that perpetrated against a government:

And then, in the same letter, terrorism becomes that of political partisanship:

The real terrors of both Parties have always been, and now are; The fear that they shall lose the Elections and consequently the Loaves and Fishes; and that their Antagonists will obtain them. Both parties have excited artificial Terrors and if I were summoned as a Witness to Say upon Oath, which Party had excited, machiavillialy, the most terror, and which had really felt the most, I could not give a more Sincere Answer, than in the vulgar Style “Put Them in a bag and Shake them, and then See which comes out first. Where is the terrorism now, my friend? There is now more real terrorism in New England than there ever was in Virginia.
— John Adams (to Thomas Jefferson), 30 June 1813

(It’s too bad that Adams’s use of the tongue twister machiavillialy meaning “in a Machiavellian manner” didn’t catch on.)

There was no entry for terrorism in Noah Webster’s dictionaries of 1806 or 1828. He added the word in his very final revision, the edition of 1840, with a definition that was broad and non-political:

TERRORISM, n. A state of being terrified, or a state impressing terror.

Webster also added terrorless, terror-smitten, and terror-struck in 1840, the latter two subsequently removed in the revision of 1864, which had a more exacting policy on the entering of transparent compounds. That same revision saw the addition of terrorist, with explicit references to the French Revolutionary period:

TERRORIST, n. [Fr. terroriste.] (Fr. Hist.) An agent or partisan of the revolutionary tribunal during the reign of terror in France.

A second shift in meaning took place later: the use of terrorism without political connotation. It was used in this way in newspaper coverage of gangsters during the 1920s:

Indeed, Al Capone, the era’s most famous gangster of all, was clearly understood by the public to be a criminal rather than a person with political motives, yet his crimes were so extreme that they were referred to as terrorism:

Regarded as the most important fact of all is this: Gangsters, by terrorism, vote stealing and bribery, swung a certain political faction into power and in return were given the privilege of operating gambling, vice and booze joints.
— Chicago Tribune, 4 July 1926

Here, it seems that terrorism is connected to the more politically neutral terrorize, meaning “to fill with terror or anxiety.” It has been suggested following recent tragic events that the perpetrators should be referred to as terrorists, and sometimes they are, but predominant contemporary usage still reserves terrorism for those crimes that have specific political motives.

Terrorism was still used to mean “violence perpetrated by a government”—the word’s original meaning—well into the 20th century:

They realize that terrorism, however effective for a while, is revolting and cannot be sustained forever; no regime can be vigilant enough in perpetuity to crush opposition wherever and whenever it arises.
— Walter Lippman, The Good Society, 1937

This meaning was reflected in the definition from the 1934 Unabridged edition, but so was the “opposing government” sense, showing that the shift in meaning had been added to the dictionary:

Act of terrorizing, or state of being terrorized; specif.: a The system of the Reign of Terror. b A mode of governing, or of opposing government, by intimidation. c Any policy of intimidation.

As for the word terror itself, our dictionaries included it as a synonym for Reign of Terror for decades, until a specific sense connected to terrorism was added in 1973:

: violent or destructive acts (such as bombing) committed by groups in order to intimidate a population or government into granting their demands

Whether or not a new sense referring to extremely violent acts without apparent motive to intimidate a population or government is added to the dictionary in the future, only time and usage will tell.