The History of Fun

The amazing story of how 'fun' became a word

A common question we get at Merriam-Webster is, what did we call something before we had a word for it? The answers are as various as the words in question.

Take "fun." Our evidence shows that fun first appeared in English in the late 1600s. Fun was a French invention, along with lace and jousting; prior to the Norman Conquest in the 11th century, fun was unknown in the British Isles. 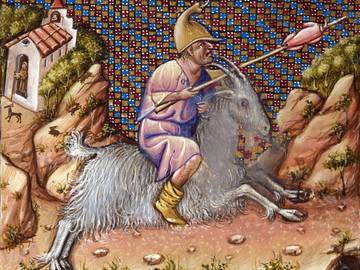 A 15th-century Spanish illustration of a fool riding a goat. Though fun had long been a staple of life in Continental Europe, it did not become fully established in England until the late 1600s.

Chaucer was the first to notably dabble in fun. While many English writers of the 14th century turned to high-flying concepts like religion, mythology, and romance—Latin concepts that had made their way to England in the saddlebags of the Norman French—Chaucer turned instead to a truly Anglo-French combination of fun and fart jokes. His Canterbury Tales revolutionized the way that fun was seen in England; it was no longer considered a stuffy diversion of the upper class, but instead was finally accessible to the average serf. Chaucer is still revered today as the father of modern English fun, and as the inspiration for the whoopee cushion.

That’s not to say that fun was fully adopted by the whole of English society. Fun was officially outlawed in England by Henry VII in what marks the first move towards reclamation of a uniquely English (as opposed to Anglo-French) identity. Fun was considered a Continental vice that had brought no good—early Tudor historians point to King Harold losing an eye during the 1066 Guerre d'Amusement, or "The Battle of Fun," as the first point at which French gaiety marred England for the worse.

Fun was embraced initially by the court of Henry VIII, though the history of this reintroduction is murky. It is rumored that fun was brought back to the English court by Anne Boleyn. As their relationship soured, Henry grew enraged at the very idea of fun, and after Anne’s death he forbade all his future consorts and wives from having fun again. This is what has led to the modern mnemonic we use to keep track of Henry’s six wives: no fun; no fun; died; no fun; no fun; survived.

Fun was finally established in England during William III’s reign at the end of the 1600s. Though William III himself was a humorless Calvinist given to bombast, the English, tired of being forgotten amidst religious persecution, court intrigue, and war, fully embraced fun. This is why the beginning of William III’s reign is known as “The Glorious Revolution.” In spite of the best efforts of the 18th-century poets, who steadfastly turned away from fun in favor of fainting and Byronic distraction, the populace was unswayed. Fun had finally taken root in England.

Fun made its way to the Americas as London’s petty criminals, convicted of injurious fun, were shipped to her shores. Fun thrived in the heat and humidity of the American South, and eventually hardier strains of fun developed and made their way north to New England. Today, fun is found all over the North American continent, especially on April Fools' Day.