They are real, but is meat the cause?

It's late in the day at the barbecue when you see it hit. Our subject (your uncle, perhaps) suddenly puts down his umpteenth hot dog. He becomes flushed and fatigued. Sweat beads on his forehead, and he begins to perspire profusely.

People have come to call this condition "the meat sweats." 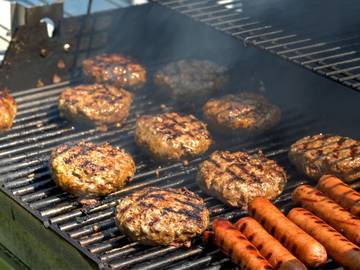 "I knew I should've stopped after the third one..."

And the revamped menu has a lot of strong options, including a half-pound burger loaded with ham, cheese, barbecue sauce and Cajun spices that will give you the meat sweats. Don't act like you've never had the meat sweats….
— Michael Rand, The Star Tribune (Minneapolis, Minnesota), 15 Mar. 2007

The challenge is not just a steak. It also includes a baked potato, ranch beans, shrimp cocktail, house salad, and a buttered roll. Sid and the girls cheer you on, as well as the wait staff and several of the other customers in the restaurant. After finishing the salad and putting a sizable dent into the slab of beef, the meat sweats kick in and it becomes difficult to swallow. Failure to complete the challenge in under an hour will cost you $72. Alex dabs your forehead with her napkin like you're a prize fighter waiting for the next bell.
— Doug Haines, The Texas Review, Spring/Summer 2015

But the barbecue is the namesake, and they do a well above average job of it. I can attest, having endured the resultant meat sweats … associated with consumption of the Butcher Paper Sampler—a veritable bargain at $25 as it contains a helping of all the meats on the menu: baby back ribs, a pork chop, chicken, beef brisket, pulled pork and pork belly….
— Dan Gigler, The Pittsburgh Post-Gazette, 17 Aug. 2017

To explain this sweating, some doctors point to a phenomenon known as "diet-induced thermogenesis" in which the internal body temperature is increased after eating due to an increase in metabolic activity. Normally, the thermic effect of digestion is minimal, even in the breakdown of meat, and does not lead to sweating.

But what if you just add more? Many competitive and casual overeaters theorize that a large enough amount of food consumed could raise body temperature, as high-protein items such as meat are more difficult to digest and create a greater amount of heat during breakdown than carbohydrates and fats. However, doctors are not entirely convinced since studies on metabolism suggest that digestion of even several pounds of meat will not produce enough heat to induce a reaction. Other factors must come into play.

For one, there is the temperature and spiciness of the meat to consider. In addition, the sodium in meats may increase water retention and, in turn, trigger the body to dispose of the water through sweat. Perhaps the meat sweats are from a combination of these factors in addition to the increase in metabolic heat. For those who have experienced or witnessed the meat sweats, this may seem reasonable, but it still waits for scientific validation. (Also worth consideration is how often they accompany meat eaten outside in the sunshine and while also, well, imbibing.)

People have been referring to meat sweats as such since the late-20th century, most famously in a 2001 TV episode of the sitcom Friends when Joey Tribbiani consumes a whole turkey (could he be any more Joey?). To this day, people use the term to describe the phenomenon, and there is more than enough anecdotal evidence correlating sweating with eating excessive quantities of meat to give legitimacy to the name.