Spreading the Word on 'Leak'

If anyone asks, you didn't hear it from us

For today’s installment of ‘articles based on statistically improbable phrases’ we are focusing on the question of ‘haven’t you ever wondered where leak comes from?’ The leak we are interested in is not the one you’ve long been avoiding under the kitchen sink, but rather the surreptitious dissemination of information. 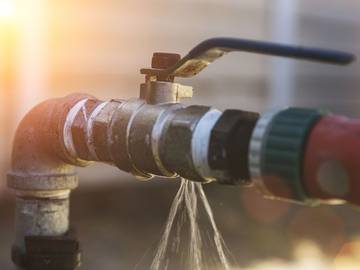 But you really should figure out the one under the sink, too.

A recent article in a New York newspaper begins with the words “There is a good deal of stir at Washington, we hear, about the supplementary Ostend Correspondence….”, makes mention of this correspondence being given to Congress, and then continues with “and of course the believers are in great stress to learn who leaked the information.” Without giving the matter too much thought, take a guess at the year this was published (we should admit that we are using the word recent in a very broad sense here).

The article is from 1855, in the heady days of the administration of Franklin Pierce, the 14th President of the United States, showing once again that certain political machinations, and the words that accompany them, are often older than we think.

Leak has been in use for a very long time; since the 14th century as a verb, and the 15th as a noun. The earliest sense used was “to enter or escape through an opening usually by a fault or mistake,” one that is still very much in use. The senses of the verb and noun that we associate with information and secrets began to see use in the 19th century.

They have, indeed, in a few instances, suffered the secret to leak out, through the medium of a small pronoun, such as let us make man, and who will go for us?
— Trumpet and Universalist Magazine (Boston, MA), 12 Mar. 1831

If they have been discovered, they will one day be known generally. The secret will leak out.
— The Spectator (London, Eng.), 6 Dec. 1845

If from such a quarter,—if from him, no revelation of the secret can be feared, it will still leak out, and the nations of the world generally, must have destructive powers at their command till now unknown.
— The Mirror of literature (London, Eng.), 27 Jul. 1844

These early uses show leak simply being used in a figurative manner, but before long the word came to be directly associated with secrecy and clandestine matters.

The price to be paid for the Island is $85,000, although the modest sum of $250,000 was asked for it by the speculating owners, who evidently had obtained information, by some leak in the Board of Selection, of the choice which had been made of their property.
— New York Daily Times, 22 Dec. 1852

Governor Robinson is very close about his message; no one around him can be accused of leaking about his department, but it is certain that all the reform measures recommended by him will be urged with great force and ability.
— Buffalo Courier (Buffalo, NY), 1 Jan. 1878

LEAK. To impart a secret. LEAKY. Not trustworthy.
— George Matsell, Vocabulum; or, The rogue’s lexicon, 1859

While the use of leak is well attested to in the 19th century, leaker (“one who leaks”) appears to have not come into common use until the early 20th.

The main hearing was stripped of sensation except for the demands for books and the Congressional action hint. There were no new names of alleged leakers or leakees.
— The Morning Post (Camden, NJ), 23 Jan. 1917

We regret to inform readers that, despite the word’s appearance in the above citation, there is currently insufficient evidence for us to warrant providing an entry for leakee. You’ll just have to use your imagination.