Hard core has traveled a somewhat curious path through the English language, moving from one kind of rock to another, in a manner of speaking, and along the way both changing and keeping its initial meaning. What is the origin of this word, which can be used to refer to devoted enthusiasts, certain kinds of musicians, salacious films, and several other things besides? Well, as with so many words in our current vocabulary, it comes from the jargon of British builders in the 19th century. 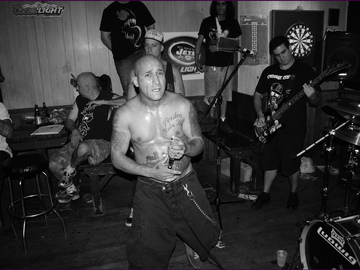 When used as a noun meaning "the most devoted and active members of a group," it's 'hard core.' When used as an adjective meaning "very active and enthusiastic," it's 'hard-core'. The musical genre, however, is 'hardcore'. Simple, right?

Just kidding. We don't actually get that many words from this source. We do, however, get hard core. Our earliest known example of the word is from 1841, when it only had the meaning of “brick rubbish, clinker, broken stone, or other hard material in pieces used as a bottom (as in making roads and in foundations).”

The yard should be laid with gravel, on hard core, sloping towards a drain, or dung pit in the centre; and so well covered with litter, as to give a soft and pleasant footing to its unshod occupants; and to complete the proper comfort and convenience of the Straw Yard.
— George Tattersall, New Sporting Magazine, Sept., 1841

So the earliest sense in which hard core was used was in reference to a sort of foundation on which something substantial was built. In the early 20th century the word broadened its sense to refer to serving as the foundation, or central element, of things aside of man-made structures, such as groups or organizations.

They are the hard core of the Unionist Party, the remnant of the old Conservatives, the rump of the still older Tories.
— J. B. Firth, Fortnightly Review, April 1922

By the 1930s the word has taken on a new part of speech, and was being employed as an adjective, first to refer to the issue of unemployment, and soon after to describe political supporters.

May I ask the Prime Minister, with regard to the Debate on Unemployment on the Second Reading of the Consolidated Fund Bill on Wednesday, whether it will be possible for a Minister to be present to give the general policy of the Government with regard to the problem of hard-core unemployment in the distressed areas, as it is the desire of the Opposition to discuss that problem, and not so much the general range of a Departmental question?
— Clement Attlee, Commons Sitting, 15 March 1934

Balloting ILGWU locals has been running pretty much as expected; administration slates won handily all over, with the Communists’ votes confined to their dwindling coterie of hard-core supporters.
— The Call (New York, NY), 24 February 1950

A couple of decades after hard-core became an adjective, it found itself attached to films of a certain (extremely pornographic) style. This appears to have begun in the late 1950s, and has proved to be a rather popular sense of the word, judging by the extent to which it is still in use. In the 1970s, hard core began to expand its media empire and, in addition to describing films, it began to describe a genre of very loud, fast rock music (usually hardcore).

Today, the word can mean all of these things—although you are quite unlikely to come across anyone using it in the original sense—and is still apparently adding new senses. One of the more recent senses in which hard-core is used as an adjective is with the meaning “serious or intense in nature or degree.” Although, as may be seen by the citations below, what counts as “serious” or “intense” may not be the same for everyone.

"The epitaph on his grave says 'Sweet Jesus have mercy'. That's hardcore. I read that and cried." In Brigid Mackenzie, Australia has a smart and sweet reason why Anzac Day grows in prominence and potency every year.
— Andrew Carswell, The Advertiser (Adelaide, Australia), 24 April 2015

Apparently the Queen Mother called 6pm "happy hour" as that was when she switched from red wine to Dubonnet and gin. Wow! That's hardcore!
— Oscar Quine, The Independent (London, UK), 27 June 2015