A Brief History of 'Hack'

This word gets a lot of mileage

The word hack can describe any number of occupations, often with a tinge of disparagement. Most often, the term describes a writer who churns out words, usually on assignment for a fee. 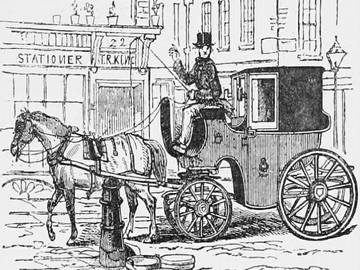 "A Hackney Coach, 1842," from 'London in the Nineteenth Century' by Sir Walter Besant. The word 'hackney' went from describing a type of horse to describing the vehicle the horse pulled; from there, 'hack' became a term for a person who works for hire.

The word is often used attributively:

Everybody who came along, from hack journalist to hack playwright, and assorted magazine writers who weren't worth a patch on his pants, could take a potshot.
–Raymond Carver, The New York Times Book Review, 22 Apr. 1984

To some, the word might conjure images of a writer idly "hacking" away at a typewriter, but hack comes from an entirely different occupation: cab driver.

Hack is short for hackney (from the Middle English hakeney), which at one time described a horse of average size, used for regular riding—as distinct from stronger horses used for hauling or in war.

Such horses were often let out for hire to pull a coach or cab. Soon hackney became a term for any vehicle for hire, traditionally a four-wheeled covered coach pulled by a two-horse team. The cabs were introduced in London in the 1600s, and immediately there were objections, as they were regarded as nuisances to the public peace. In his 1635 work "The Old Old Very Old Man," the poet John Taylor wrote that "the multitudes of Hackney or hired Coaches ... never swarmed so thick to pester the streets as they doe now." (Our word hackneyed now describes something too commonplace to be of any note.)

The public's distaste for the cabs reached the point that they were apparently banned for a while by the crown:

"Notwithstanding this was the first day of the King's proclamation against hackney coaches coming into the streets to be hired, yet I got one to carry me home."
–Samuel Pepys, diary, 1660

Hack as a vehicle for hire was established by the 19th century:

His new friend secured a hack, the driver of which agreed for extra recompense to receive the dripping boys into his carriage, and they were whirled rapidly to a pleasant house in a side street.
–Horatio Alger, Ragged Dick, 1868

It was a hack like any other, only a trifle dirtier, with a greasy line along the top of the drab cushions, as if it had been used for a great many Irish funerals.
–Henry James, The American, 1877

And hack as a slang for a cab (or its driver) persists in contemporary English:

...finally, after nearly getting sideswiped by several taxis as he tried to hail one from the middle of Park Avenue, he got a hack to stop by coquettishly hiking up one of the legs of his shorts a la Claudette Colbert.
–Tom Verducci, Sports Illustrated, 17 Aug. 1998

Senturk — who had planned to drive the men to an 11th Avenue gym — was accused of illegally working as a hack and had his car seized.
–Rebecca Harshbarger, The New York Post, 27 July 2014

It didn't take long for hack to catch on in other fields, referring to anyone who works for hire. In particular, hack carries the insinuation that the work is produced to fulfill an assignment and not expected to be original or risk-taking. And perhaps because of that, there comes the suggestion that the work of a hack in any field is unexceptional:

Only a hack looking for an easy way out would reference a certain shopworn line from Charles Dickens, transposed, to describe what happened to Lance Deal on July 28, 1996.
–John Crumpacker, The Register-Guard (Eugene, Ore.), 6 July 2016

...his genuine charm is how clearly he still thrills at the good fortune of his own life’s journey, from small-town hack lawyer, struggling to make ends meet, to multi-millionaire novelist with a private jet.
—Peter Foster, The Telegraph (UK), 17 Oct. 2014

If a three-prong outlet is installed with only two wires and no grounding path, we call it an ungrounded three-prong outlet. This is a common defect at old houses, and sometimes at newer homes where some hack has been messing with the wiring.
—Reuben Saltzman, The Star Tribune, 27 Oct. 2015

Additionally, hack can refer to one who operates (as for a party) out of blind loyalty:

Khrushchev was succeeded by Leonid Brezhnev, a shrewd but under-educated party hack who functioned politically as an ultracautious centrist.
—Paul Robeson Jr, A Black Way of Seeing, 2011

The theory implicit in Gerth's Times stories may be summarized as follows: when his business partner and benefactor McDougal got in trouble, Bill Clinton dumped the sitting Arkansas securities commissioner and appointed a hack, Beverly Bassett Schaffer.
—Gene Lyons, Harper's, October 1994

Yet another sense of hack refers to a prison guard or custodian:

"Then he nodded to indicate a beefy prison guard standing behind the glass near the exit. 'See that hack over there what looks like he ate too many dollar specials at the Taco Bell?"
—Kevin Haas, Dark Men, 2011

And some uses show apparent influence from the "cut with repeated irregular blows" sense of hack. A hack golfer is one who plays poorly. But this usage also plays on the notion of a bad golfer taking clumsy, hack-like swings at the ball:

While pricey clubs might add a few yards to Tiger's drives, they offer little solace to muni-course hacks like you and me ....But for the hack golfer, smaller club heads aren't helpful. The average golfer is more concerned with "forgiveness"—essentially, that poorly struck and errant shots will not stray too wildly and get a golfer into much trouble.
—Nick Schulz, Slate, 5 Feb. 2003

It works for other sports, too, such as tennis:

For workers enrolled in such a plan, it's the chance to push for some free schooling, the kind that will turn a Sunday tennis hack into a player capable of winning the long rallies
—Charles A. Jaffe, Boston Globe, 22 Jan. 1996

It is perhaps uses like these that reinforce the notion of a hack's work as mindless, automatic, or done without applied effort.

And of course, we would be remiss if we didn't mention hacker, the term for one who accesses a computer network by surreptitious means. While hacker and the related sense of hack hint toward a kind of destructive vandalism, in reality the words once described the activity of one who programs computers out of sheer interest for the subject—an amateur, essentially.