Going to the grocery wasn't always a chore.

The history of grocery begins with a dealer who sold by the gross—that is, in large quantities at discounted retail prices. A grocer in medieval England was a wholesaler, and the name is derived from an Anglo-French word having the same meaning, groser. Grocer gained widespread use during the 14th century when a group of wholesale dealers in spices and foreign produce came together to form the Company of Grocers of London, which now exists as the Worshipful Company of Grocers—a charitable and ceremonial organization in London. 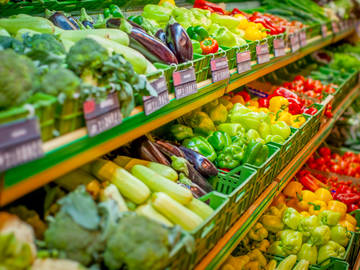 A shot or two might make lettuce selection more interesting.

In time, the name grocer came to refer to a trader who dealt in staple foodstuffs—like tea, coffee, cocoa, sugar, and flour—that were sold in amounts measured for personal consumption. By the 19th century, the grocer could apply for a license to sell beer, wine, and spirits—which more than likely riled the keepers of inns and taverns.

The first known use of the word grocery was in the 15th century, and it referred to the goods sold by a grocer.

In 17th-century American English, the word was naturally extended as a name for the stores that sell groceries.

There's still in store some shirts, women's hose, and some bales of coarse cloth, with a parcel of hats and shoes; the best wares are disbursed for provisions … many of which were sold by me for Wampum ..., in small quantities, so that the store might well be called a grocery.
— Garrett van Sweringen, letter, 1659

Perhaps influenced by the grocer’s license to sell alcohol, grocery also became a 19th-century designation for a barroom.

Almost all the roads leading to a town in America are full of houses on their sides, called "taverns," or "liquor," "beer and cake," or "grocery," stores.
— Joseph Pickering, Inquiries of an Emigrant, 1832

Mr. Jarboe was aroused from his reverie on the closing of the grocery.
—Samuel Hammett, Piney Woods Tavern, 1858

This use of the word faded away by the mid-20th century while grocery referring to a store got supersized.

By the end of the century, grocery store chains began to emerge, and in 1913 a firm in the state of Montana patented groceteria (based on cafeteria) for a self-service grocery store in which shoppers picked items themselves. The concept of the groceteria was fully realized a few years later and revolutionized the grocery store business. Previously, shoppers used to ask for or provide the grocer with a list of items they wanted to purchase and then waited for their order; now the items were picked and chosen by the shoppers of the grocery store and brought to the store’s clerk.

This new grocery store was the precursor to the supermarket, which began popping up across the United States in the 1930s. It should be noted that across the pond establishments called superstores—large supermarkets or department stores—were in business almost two decades prior to the American supermarket. The British were apparently first to give a name to a large-scale food retailing store but not to a store offering several lines of non-food merchandise: the department store originated in America during the late 19th century.