The Difference Between 'Grizzly' and 'Grisly'

The adjective grisly is used to describe something that inspires horror or disgust:

"American Horror Story" is a pretty grisly show. No one should be too surprised by that revelation - it's sort of the promise implicit in its name, after all.
— Lacy Baugher, The Baltimore Sun, 3 Nov. 2016

The homophonic adjective grizzly describes something that is gray in color, particularly fur or hair of that color:

He was rarely seen without his baggy woollen cardigan, while behind his thick hedges of grizzly hair and beard a raffish grin could occasionally be spotted
— The London Times, 22 Jan. 2018 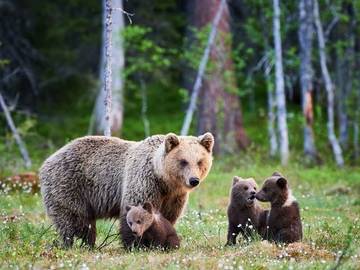 When it comes to usage, don't just play dead.

The grizzly bear (Ursus arctos horribilis) is given its name because of the grayish appearance of its fur, despite being classified as the same species as a brown bear. The grizzly, native to North America, often has light-colored tips on its fur, giving it its grayish color.

Where Does 'Grizzly' come From?

The word grizzly derives from the Middle English grisel¸ which means "gray" and comes from the Anglo-French gris, describing the same color. The adjective grizzled means "having gray hair" or "marked by streaks of gray," but since human hair usually doesn't turn gray until later in life, the word comes with a suggestion of age or experience, as in "a grizzled veteran of the war against linguistic mistakes."

Despite their differences, it is a common occurrence for grizzly to be used in instances where grisly is the appropriate word:

Photos from inside the derailed Amtrak cars in Washington state show a grizzly scene of mangled metal and broken windows
— AOL.com, 19 Dec. 2017

Let’s say you finally find the home of your dreams—and you have the $2.3 million on hand to buy it—but it comes with one little catch: it happens to be the site of a notorious, grizzly murder. What would you do?
— TimeOut Los Angeles, 27 July 2016

Hidden Agenda centers on a group of people trying to stop a serial killer, so you can expect to see plenty of grizzly death sequences like in Until Dawn.
— Engadget, 12 June 2017

The confusion is understandable. Although they supposedly avoid contact with humans, a grizzly bear's sheer size and strength is enough to induce fear and bring a reputation for ferocity. The image of a bear attacking a person, or perhaps ransacking a campsite, could certainly inspire the kind of fear or dread suggested by grisly.

Where Does 'Grisly' Come From?

But grisly is in fact a distinct word, derived from the Old English grislic, related to an Old English verb meaning "to fear." That's why it's used to describe things like murder scenes and gory movies.

And if a grizzly bear is wanted for a gruesome crime? You might want to make sure your context is clear if you opt for grizzly over grisly, or you can opt for the pun, as some writers do:

Canadian police are investigating a grizzly scene that took place at an Innisfail, Alberta Dairy Queen earlier this week, when an online video emerged of a small bear eating ice cream from the drive-through window. — Charlie Heller, Food & Wine, 19 Jan. 2018