You’ll be amazed by the answer, we swear.

You’ve seen a grawlix before, especially if you’ve ever read the Sunday comics. But you might not be aware that the thing had a name.

The grawlix is the character or series of characters that often appear in place of profanity—the graphical version of bleeping out a word, if you will. 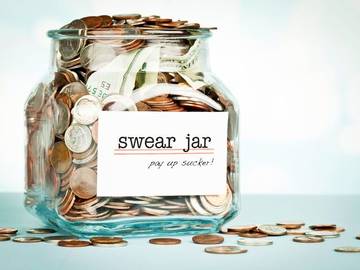 Typically a grawlix is made from the unpronounceable characters that can be found on top of the number row on your computer keyboard: the at sign (@), the pound sign or octothorpe (#), the dollar sign ($), the percent sign (%), the ampersand (&), and the asterisk (*).

Come this fall, CBS will debut a 7:30 p.m. sitcom starring 79-year-old William Shatner. The title is $#*! My Dad Says. The opening profanity symbols (called grawlixes) will be pronounced "bleep," but we all know what it stands for.
— Michael Storey, The Arkansas Democrat-Gazette, 20 July 2010

Although the use of grawlixes in comics preceded him, the coinage of the term grawlix is credited to the late cartoonist Mort Walker (1923-2018), creator of Beetle Bailey, which debuted in 1950.

Walker coined a number of terms for the tropes of comic drawing, and he collected them in a book, The Lexicon of Comicana, published in 1980. Other coinages from Walker included briffit, for the cloud of dust left when a character makes a hasty getaway, and plewds for the drops of sweat that are shown when a character is under stress. Walker’s grawlixes often included a spiral-shaped symbol as well.

There’s nothing to indicate where Walker came up with grawlix, but it is notable that the word resembles growl, which suggests the kind of muttering sound one makes when angry. The need to express anger comically, in implied adult language, probably suited Beetle Bailey, whose title character was a lazy army private. The grawlix would have been a handy tool for Sergeant Snorkel and other characters to express frustration, and, since the strip was set on an army base, where children were rarely featured as characters, it’s realistic that vulgarity would rise to the surface.

Sometimes the symbols used for a grawlix might be selected specifically for the word it's meant to represent. In the title $#*! My Dad Says, for example, the resemblance of the dollar sign and octothorpe to the first two letters of the word (you know the one) is probably not coincidental.