National Grammar Day debuted on March 4, 2008. It's the brainchild of Martha Brockenbrough, founder of the Society for the Promotion of Good Grammar (SPOGG). And while you won’t get the day off from work for it, it’s a reason to celebrate grammar nonetheless. 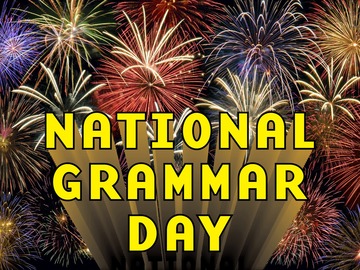 March 4th, National Grammar Day, is a day for joyous celebration. Don't spend it bemoaning the grammatical crimes of others.

Grammar is technically a pretty narrow term. It includes the categories we put words in—that is, whether a word is a noun or an adjective; inflections—like what the past tense form of a particular verb is; and syntax—why we say "I left it there" instead of "I it there left."

But in the wild revelry that typically accompanies National Grammar Day celebrations, amid all the fireworks with their shimmering punctuation raining down, the term grammar turns into a giant carnival tent celebrating word choice, spelling, punctuation, and pretty much anything else you can think of that's language-related.

And by "celebrate" we mostly mean bemoan the grammar crimes we commonly see and hear all around us—the misplaced apostrophes, the their where there is wanted, the hyperbolic use of literally. Rather than join in on the bemoaning, we thought we'd offer a little perspective on the tirades that may be volleying about during the holiday. What follows are some word uses that, while perfectly common and acceptable today, were all at one point considered "bad English":

Aggravate
The "to rouse to displeasure or anger by usually persistent and often petty goading" meaning aggravated critics from the late 1800s through much of the 20th century—despite the fact that the meaning dates to the early 1600s.

Balding
It was new in 1938 and disliked until it proved too useful.

Craft
The verb, as in "crafting a poem," wasn't common until the late 20th century, when people spurned it as an upstart. But it actually dates to the 15th century.

Finalize
It was common in Australia and New Zealand in the 1920s, but an object of derision in the U.S. for a long time.

Mentality
This word as used to mean "mode or way of thought" or "outlook" bothered some folks of a stodgy mentality in the early 20th century.

Out loud
For much of the 20th century, you'd be criticized for reporting that something was said "out loud" rather than "aloud."

Transpire
Using this to mean "to happen" a hundred years ago was a big no-no.

Upcoming
The word was new in the 1940s and condemned by some as "journalese."

Won't
It was described as "absolutely vulgar" (along with ain't) in an 1846 address to high school students—criticism that was piled onto more than a century of previous objections.

We won’t presume to predict what pet peeves today will become common use in short time, but feel free to share your own peeves in the comments below.