Is it 'graduated' or 'was graduated from'?

No, this will not be on the test 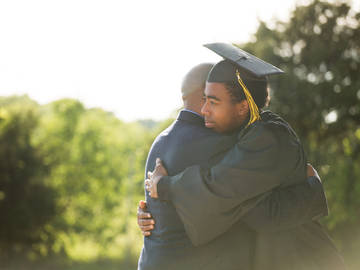 In the second half of the 19th century, many usage writers decided that 'graduate' should only be used in a transitive sense; as one such commenter wrote, "students do not graduate; they are graduated." You can safely ignore this rule.

Graduate has been with us since the 15th century, existing as a noun, an adjective, and a verb (most people who worry about this word are only concerned with the verb use).

Is not hee the souerayne Doctoure, graduated not at Paris, but in Paradyse, whome our Heauenly Father hath ordeyned for our chief schoolemaster with expresse commaundement, to heare him?
—Antonio de Corro, A Epistle or Godlie Admonition (trans. by Geffray Fenton), 1569

The propriety of how to use graduate appears to have not been something that we fretted about overmuch until the second half of the 19th century, when some grammarians suddenly decided that this was something very much worth fretting about, and that the word should properly only be used in a transitive sense: "She was graduated from Nescience University."

This word, when applied to one who receives a degree from a college, is a past participle of the verb to graduate, (to mark with degrees, to confer a degree,) and requires some part of the verb to be before it: yet it is, oftener than otherwise, used in the past tense of the active verb. In the memoir of Webster, at the beginning of his dictionary, it is said that "he graduated with reputation in 1788." The biographer might as well have said that "he born on the 16th of October, 1758."
—Edward S. Gould, Good English, 1867

It should be noted that this new rule was not met with universal acclaim. George Washington Moon, a rival usage guide writer (yes, that's a thing) responded to Gould's admonitions about graduate in an 1871 book, writing "Was there ever such nonsense written by one professing to teach the proper use of the English language?"

Despite Moon's feelings on this matter, other guides soon picked up on the notion, and before long the speakers and of the English language had a new way that they could annoy others people of whose speech they disapproved.

Graduated. Students do not graduate; they are graduated. Hence most writers nowadays say, "I was, he was, or they were graduated"; and ask, "When were you, or was he, graduated?"
—Alfred Ayres, The Verbalist, 1894

His social activities, of course, interfered to some extent with his business, but then he had worked hard at wholesale hardware for twenty-five years and felt that he could soon hand it on to his son, Roscoe, who had recently graduated from Harvard.
—F. Scott Fitzgerald, The Curious Case of Benjamin Button (From Tales of the Jazz Age), 1922

There is still another way in which graduate is used, and this one does still produce ire in some people, in which the word is used in a transitive sense and with the meaning "to be graduated from" ("I graduated college this year"). This use is not uncommon, but it is frowned upon by some guides.

If you are one of those who are on the cusp of graduation, you may now take comfort in the fact that the correct use of graduate as a verb need never plague you again. Armed with this knowledge, you will get that job you're interviewing for next week; you will also gain the respect and admiration of your familial elders, and the world, in general, will be your oyster.