Those people who wish to describe themselves as people who love food, but who are averse to self-identifying with the word foodie, are left with several options. There is epicure, which is defined as “one with sensitive and discriminating tastes especially in food or wine.” However, this word also has the meaning of “one devoted to sensual pleasure,” and is therefore perhaps best avoided. There is the option of describing oneself as a gastronome (“ a lover of good food”), but this is an obscure word, and when attempting to let others know that you value fine grub it is important to be understood.

For many people the choice of descriptors comes down to a battle between gourmand and gourmet. While both of these words are concerned with food or drink and the enjoyment of ingesting these things, they have histories and meanings which are different enough that a degree of consideration is warranted before describing yourself as one or the other. 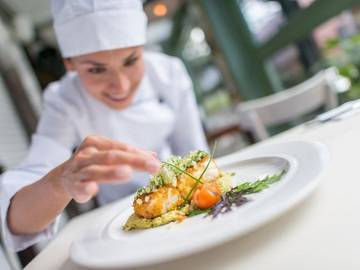 "And with that, you have officially entered Flavortown."

Gourmand is the older of these two, in use since the 15th century. For the first several hundred years this word was in use its meaning was largely confined to “glutton,” or “one who is excessively fond of eating and drinking.”

And in regard he was but a weake witted man, and a gourmand or grosse feeder; his language was the more harsh and rude, like to our common Porters or loutish men, and his carriage also absurd, boore-like, and clownish.
— Giovannia Boccaccio, The Decameron, 1620

A man wonderfully polluted with Homicides, and Adulteries, a great gourmand, and an infamous drunkard, who, to refresh his body inflamed with too-much Wine, and Usquebagh, he was faine to bury himselfe often-times in ground, up to the chin.
— William Camden, The true and royall history of the famous empresse Elizabeth, 1625

Gourmet is defined as “a connoisseur of food and drink.” The word may also function as an adjective, meaning “of, relating to, or being high quality, expensive, or specialty food typically requiring elaborate and expert preparation.” This word is a relative newcomer, not showing up in English until the end of the 18th century as a noun, and the end of the 19th as an adjective.

His crew were considerably diminished; he had lost five men; and I had taken with me three, together with a gourmet; which (if we comprehend another left at Galam, to assist in replacing the fort) deprived him of the aid of ten of his men.
— Saugnier, Voyages to the coast of Africa, 1792

To the Nobility and Gentry.—To be Sold, a few Pipes of a very curious old Red Port, having been imported for a great Gourmet.
— The Times (London, ENg.), 20 Aug. 1798

We unfortunate city folks must e’en ‘pale our ineffectual fires’ before such gourmet glories as these. But, when the country editor, enthused by sweet-potato-and-possum-fat, proceeds to recommend and indorse sweet potato coffee strengthened by dried apples, as superior to the Java or Mocha berry, we beg to protest.
— The Times-Picayune (New Orleans, LA), 5 Nov. 1879

Gourmet may be traced to the French word grommes, which may mean, among other things, “wine merchant's assistant.” As seen in its early uses, the word once had a meaning in English that was much closer to its French roots, as it typically referred to one who discriminated in wines, rather than food. Gourmet now shares its meaning with food and drink, and the semantic province of wine words has been largely taken over by such as sommelier (“a wine steward”), oenophile (“ a lover or connoisseur of wine”), and, for the truly discriminating, stewbum (“drunkard”).

This does not mean that the two words are interchangeable; many writers do take care to distinguish between gourmet and gourmand.

Gourmet without being gourmand, she became conscious of her weight in later years.
— Jessica B. Harris, The New York Times, 4 Jun. 2014

Even in such instances where gourmand is used without the judgmental feel of “glutton,” the sense of “heartily interested in good food and drink” tends to be easily distinguishable from gourmet. The gourmand tends to engage in a more populist form of eating and drinking than the gourmet.

Many topics are treated, including good eating and drinking, for Mr. Liebling is proud of being a gourmand.
— Morse Allen, The Hartford Courant (Hartford, CT), 22 Dec. 1963