If you happen to be friends with newspaper editors (as we happen to be), you find that some of them have very strong opinions about phrases and collocations that you give little thought to whatsoever. Sometimes their dislike of these phrases is so strong that you begin to wonder if you should excise it from your vocabulary altogether. Which phrases should go missing? 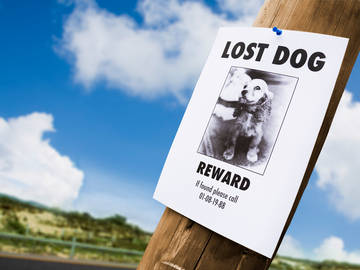 Though many editors despise 'go missing', the phrase fulfills an important semantic function.

For starters, go missing. This is a phrase that grates against many editorial nerves here in the States, and the reasons behind the annoyance are inevitably that a) it's new, and b) it's a British import.

Neither of these reasons are quite correct. Go missing (in all its conjugations of go) has been in written use for the last 170 years, and the earliest evidence lexicographers have found for it so far shows that it first originated in American English. That said, the phrase has gained more use in the few decades of the 20th century, which leads people to believe that it's new, and is more common in British English sources than in American English sources. Those who complain that British English has no place on American shores should perhaps pause and consider where, exactly, the English language originated.

There are others who try to prove their nerd bona fides by claiming that go missing is ungrammatical: that gerunds (which are noun substitutes) like running and fishing can follow go, but participles (which are adjective substitutes) like missing cannot. This is generally twaddle: simply because go isn't paired with many participles doesn't mean that it's not allowed to be paired with a participle like missing. There are other idioms that pair go with participles, and some of them are far older than go missing:

When a Shipp sailes, and the Sheate is veered-out, wee saie she goes veering.
— Henry Mainwaring, Nomenclator Navalis, 1625

A slip of the foot may soon be made, which will make a man go halting all along after.
— Thomas Boston, The Crook in the Lot, 1732

The railing against go missing is relatively recent and seems to be a peeve of the newspaper industry: the AP Stylebook advises that one should use vanish or disappear instead. Still others suggest is missing instead of gone missing or went missing. Yet go missing actually fulfills an important semantic function that none of those other substitutions does: it subtly signals that the disappearance of a person or thing might be intentional ("My cat went missing over the weekend, but came back home on Monday.") or unintentional ("My keys have gone missing."), or voluntary ("When talk turned to politics, Uncle John suddenly went missing.") or involuntary ("The football trophies went missing from the display case over the weekend."). Vanish and disappear are not terrible substitutions, though there are those that associate them either with sinister goings-on ("The children disappeared.") or magic ("The rabbit vanished in a puff of smoke."). For newspaper reporters especially, go missing is a handy hedge that communicates that the full details of someone or something's disappearance are unknown.

Should you avoid go missing? No, unless you write for a newspaper and you know your editor isn't fond of the phrase. It is completely idiomatic in American (and British) English.