Get Schooled on 'School'

What does a school of fish have to do with a classroom? Nothing.

No doubt the expression "a school of fish" seems to most people to involve the same word for the place of learning, since it is easy to imagine a connection between the image of a group of fish and that of a class being marched along in orderly columns with ever-renewed fringes of disorder. But that school is etymologically unrelated to the schoolhouse school. 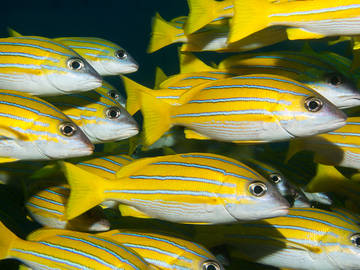 The 'school' in "school of fish" shares a root with 'shoal'. The educational 'school' comes from the Greek word 'scholē', which means "leisure."

The school in "school of fish" comes from Middle Dutch schole and is related to Old English scolu, meaning "multitude" or "school of fish," and to Modern English shoal in the same meaning. The situation is doubly confusing as shoal also has a homograph meaning "shallow place." This last shoal is probably related to shallow.

On the other hand, the word school referring to a place of learning traces back to Greek scholē, which has a meaning that will surprise students—"leisure." The leap from leisure to learning is not as great as one might first think. To the Greeks, leisure allowed a man to spend time thinking and finding out about things. Hence, the connection between leisure and the pursuit of knowledge, and eventually to a place of learning. The Romans borrowed the Greek word with its educational meanings as schola, which became scōl in Old English. This word evolved into scole in Middle English and then into school under the renewed influence of the Latin form.

Although the words are etymologically disconnected, it is suspected that the spelling of the educational school influenced its homograph, especially since the establishment of the spelling for the place of learning occurred centuries earlier.