When someone is achieving or doing what is necessary or expected, we say they are on track:

Codey plans to introduce a bill that would take away a year of high-school sports eligibility for a student who repeats a middle-school grade for athletic advantage despite being on track academically.
— The Daily Record (New Jersey), 15 Oct. 2015

This figurative use of track doesn't require any stretch of the imagination. Track is used in many other contexts to refer to a path of achievement; you might speak of a tenure-track professorship, for example, or say that a person headed in the right direction is on the right track. 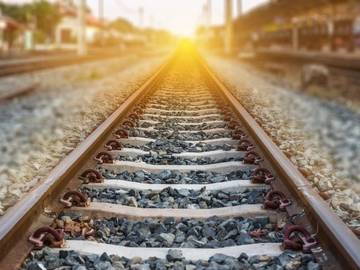 'Untrack' is a verb meaning "to cause to escape from a slump."

On track is commonly followed by a preposition that indicates direction, such as toward or for:

Just two weeks before the general election, Mayor Bill de Blasio announced that the city is on track toward building and preserving 200,000 affordable homes by 2022 — two years ahead of schedule.
— Madina Toure, The New York Observer, 25 Oct. 2017

Naturally, we occasionally see the phrase used in tandem with other railroad terminology, such as the constrasting off track (or off the rails):

But while the state of American manhood has inspired plenty of anxious trend pieces, few observers have bothered to address the obvious question: if men are going off the rails, how do they get back on track?
— Andrew Romano, et al., Newsweek, 27 Sept. 2010

So far, the metaphor makes sense. A train runs smoothly when it stays on the tracks and makes it to its destination. When it comes off track, things go awry.

In spite of this, there's another phrase out there that goes against the logic: untracked.

Last season, Stanley didn't get a save in April. He had a hard time getting people out. Once he got untracked though, he was as good as any reliever in the league.
— Jim Henneman, The Sporting News, 16 May 1983

Tennessee has lost two of three and can't seem to get its offense untracked. "We need to find our edge, and find it quickly," cornerback Samari Rolle said after a 16-13 loss to the Jaguars.
— Peter King, Sports Illustrated, 4 Dec. 2000

Alas, Stanton just couldn't get it done. He made a few nice throws here and there, but his inaccuracy on downfield plays prevented the Cardinals offense from ever getting untracked. And so it was a low-scoring, close affair for a lot of the night.
— Jared Dubin, CBSSports.com, 10 Nov. 2017

Logically speaking, untracked is a strange word. It sounds like it suggests derailment—bad news if you're literally riding on a train. It has traditional meanings of "not provided with a track" (as in "snowshoeing over untracked ground") or "not traced" ("an untracked car"). For our purposes, it turns up frequently in sportswriting; announcers, in particular, are fond of the phrase as they are routinely describing athletes as being either on a hot streak or mired in a slump.

The dictionary defines untrack as an active verb meaning "to cause to escape from a slump." In Webster's Third New International Dictionary, Unabridged, the definition for untrack was a little more literal: "to cause to move out of one's tracks: cause to get going."

So what's happening here? How can on track and untracked both be used when things are going well?

There are a couple theories at play. One is that the "track" in untracked isn't like the track of a railroad, which suggests a route that one has chosen, but more like a rut, close to the sense of the word defined as "a path made by or as if by repeated footfalls." To "come untracked" means to come out of that rut.

Another theory is that untracked is what linguists call an eggcorn, essentially an alteration of on track that takes hold in the public consciousness because it "sounds right" and follows the pattern of similar constructions—in this case, constructions beginning with come or get and another un- prefixed word (e.g., come undone, came unglued, got untethered).

The fondness for untracked in sports writing dates to early 20th-century boxing columns, but untrack as an active verb has consistently seen use in horse racing—which, naturally, takes place on a track. To untrack a horse means to remove it from competition:

Unlike Monarchos, who was beginning to show the effects of his rigorous winter-spring campaign, Point Given thrived on the work, and only accident or illness seemed capable of untracking him.
— William Nack, Sports Illustrated, 18 June. 2001

At The Boston Globe, Jan Freeman finds a 19th-century use of untrack that seems to mean "to remove or dislodge from the rut of a track," with the suggestion that the rut is what causes the horse to slow down: "'The latter [horse] did not seem able to untrack himself in the heavy going,' said The New York Times."

So the choice of untracked to mean "out of a slump" does seem to have a long pedigree. While it might be frustrating to hear untracked being used to mean more or less the same as on track, even though they sound like opposites, any effort to change these terms now would be like closing the gate after the horse has taken off. Or running after a train after it has left the station. On its tracks.