Put It in the 'Frunk'

You can never have too much storage.

Frunk is a popular portmanteau of front and trunk referring to cars that have their storage spaces in the front rather than in the rear, as is more typical. It should be noted that our definition of trunk does not require it be located in the back in the first place. 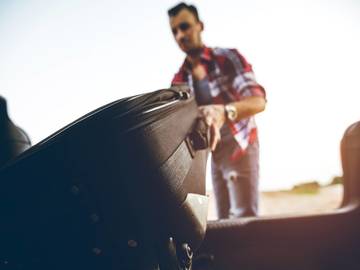 There's always room for another portmanteau.

The term frunk has emerged in automotive circles as a term for an enclosed storage compartment located near the front of the vehicle. Such compartments are meant to be analogous to a trunk, which is traditionally located in the car's rear. Frunk, naturally, is a portmanteau of trunk and front.

All Teslas, for example, have frunks. This means that while a Porsche 911 frunk might be useful for toting around a small piece of luggage, a Tesla Model S can offer SUV-like cargo capacity.
— Matthew DeBord, Business Insider, 12 June 2020

Ford has publicized that the frunk, or front trunk, of its all-new EV, the Mach-E, is built to be used as a cooler. It has a drainage hole at the bottom and a plastic liner, and with 4.8 cubic feet—or 36 gallons—of storage, it’s big enough to hold a carry-on-size suitcase or 1000 chicken wings, according to the manufacturer.
— Colin Beresford, Car and Driver, 3 Feb. 2020

The term has become popular as more and more cars (in particular, electric cars) are designed without needing the space to accommodate the traditional front-mounted gasoline engine.

'Frunks' Are Not New

The idea is not new, however. Anyone who was around during the heyday of the old-style Volkswagen Beetle knows that it was designed with the engine in the back and the front compartment used for storage. In writings about Volkswagens and similarly designed cars, the compartment was still called a trunk, though often with a qualifier:

The rear-mounted engine may usurp some rear load space in the Volkswagen Squareback, but a roomy front trunk makes up for the loss.
— Alex Markovich, Popular Mechanics, September 1970

Do Trunks Have to Be in Back?

There is nothing in the semantic definition of trunk that compels it to be located in the rear of the car. The definition (sense 2a(2)) simply reads, "the luggage compartment of an automobile." But since some newer cars have the luxury of having storage space in the front and the back, the new term has emerged to manage the distinction. And to us, that's a good thing. More storage space, of course, means more room for dictionaries.