To create something from scratch is to make it without any ingredients or materials prepared ahead of time. The scratch in from scratch originally referred to the starting line of a race "scratched" into the ground, from which all runners would be starting without a head start.

In cooking, to make something from scratch means to use only the most basic ingredients, with nothing premade:

Brad and Rachel Cottle will run the Orlando bakery and cafe, which will feature breads milled and baked from scratch daily using wheat from Montana's Golden Triangle.
— Faiyaz Kara, The Orlando Weekly, 5 Sept. 2019 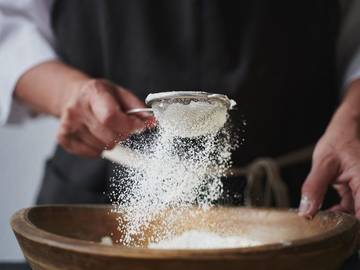 Building a structure from scratch means using no prefabricated parts:

Using Island trees Collins cut and milled himself would save money. He likes working for himself and wanted to take the time to create the barn from scratch. “I wouldn’t have enjoyed stick framing it,” he said, referring to typical construction with lumber yard wood.
— Margaret Knight, MV Times (Martha’s Vineyard, Mass.), 28 Aug. 2019

To build a business or livelihood from scratch means to start with nothing provided in advance:

To keep a sense of connection alive, it might help to turn to art that speaks to an experience we almost all share as members of a nation of immigrants: how our ancestors … were brought here by poverty, famine, war or simply hope for a better life, and how they struggled to start from scratch and stake a claim in a sometimes unwelcoming new land.
— Ligaya Mishan, The New York Times, 5 Sept. 2019

Starting at the 'Scratch' (The Starting Line)

Scratch is about beginnings, but to do something from scratch doesn’t mean to scratch something with your fingernail and have it appear. Scratch in this instance finds its origin in sports talk.

Originally, the scratch was the starting line in a race, likely from such a line being scratched into the earth when races were held on soft terrain.

A.F. Duffy, the American runner at the scratch, carried the Georgetown colors to the front at the London Athletic club meeting at Stamford Bridge to-day, in the final of 100 yards handicap with a high wind dead against him, and in quick time, winning by a yard and a quarter in ten seconds.
— The Decatur Herald, 30 June 1901

The term was also used in boxing and cricket. In boxing, it referred to a line drawn across the ring, at which opponents would be brought from opposite corners to start the match.

Tony was half afraid the referee would give the fight against him without another round, but to his joy 'Time' was duly called. He came up to the scratch as game as ever, though his head was singing. He meant to go in for all he was worth this round.
— P.G. Wodehouse, The Pothunters, 1902

Figurative Use of 'Scratch'

To come (up) to the scratch was also used figuratively to mean “to show up to a confrontation,” or to present oneself for a decisive action. (In the U.S., we might similarly use the baseball expression step up to the plate.)

A mighty man at cutting and drying, he was; a government officer; in his way (and in most other people's too), a professed pugilist; …. To continue in fistic phraseology, he had a genius for coming up to the scratch, wherever and whatever it was, and proving himself an ugly customer.
— Charles Dickens, Hard Times, 1854

A runner starting from scratch was not given a head start; applying the same idea to other sports, a scratch golfer or scratch bowler is one good enough to play without having their score adjusted with a handicap.