Where Does 'Friendsgiving' Come From?

Escape your family and celebrate with friends

Here in the U.S., we love our holidays—so much so that we've created some informal ones to sandwich in between the more traditional ones. We are currently in Friendsgiving season. 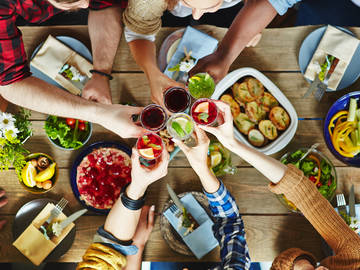 Though the term 'Friendsgiving' seems to be everywhere, it's surprisingly new.

Friendsgiving is a blend of friend and Thanksgiving, and it refers to a large meal eaten with friends either on or near Thanksgiving. People are serious about their Friendsgiving celebrations: there are how-tos, sample menus, rules, and even commandments for Friendsgiving. But when Friendsgiving first came into use, it was used to describe something much more informal than the traditional Thanksgiving meal.

First Use of Friendsgiving

Friendsgiving seems to be a relatively recent word. The earliest print uses of it that we've found so far date back to 2007, where it shows up in Usenet posts and on Twitter to refer to this informal meal. (Several word detectives have found a personal online photo album called "2004 Friendsgiving," but after some sleuthing, we've determined that the album went online sometime in 2014, well after our earliest print use of Friendsgiving appears.) Given the fact that the word isn't explained in these posts and tweets, it's likely that Friendsgiving was floating around in spoken English for a bit before it showed up in written English—and this is pretty standard for new vocabulary.

Because we all had so much fun this Friendsgiving we forgot to do secret santa.
—Usenet group (Friends of the Friendless), 14 Dec. 2007

But just because you can’t go home for the holidays doesn’t mean you have to be alone and leftover-less. Friends, coworkers, neighbors and “holiday orphans” can celebrate a fantastic “Friendsgiving” instead.
—Rebecca Ross, Pensacola News Journal (Pensacola, FL), 27 Nov. 2008

Happy Friendsgiving. Do you celebrate Thanksgiving with friends instead of family? The Life section is looking for locals who toss tradition to the wind and celebrate Turkey Day with their pals, or open their feasts to holiday orphans.
—Pensacola News Journal (Pensacola, FL), 20 Nov. 2008

But it really started coming into national prominence in 2011 when Bailey's Irish Cream used the word in an ad campaign and it became a plot point in The Real Housewives of New Jersey (the episode was, appropriately enough, called "Gobblefellas"). That began a steady uptick in use of Friendsgiving: we've seen more significant use of the word from 2012 onward. And ironically, what began as an alternative to Thanksgiving has now become a second Thanksgiving, with all the commercial tie-ins of the original holiday. Nancy Friedman highlights a few from 2013, and notes that Butterball, purveyors of Thanksgiving birds, filed for trademark protection on the phrase "Butterball Friendsgiving."