What's this in the fridge?

Who put the d there, and is it still any good?

Fridge, pronounced /FRIJ/, is the shortened form of refrigerator that started appearing in print in the early 20th century. The word was likely spoken long before it appeared in writing. To make clear the proper pronunciation of the word, printers added the d to mirror other words with similar soft g's, such as bridge and lodge.

We here at Merriam-Webster have a PSA: spelling does not always follow basic logic. In fact, most of the time it does not. 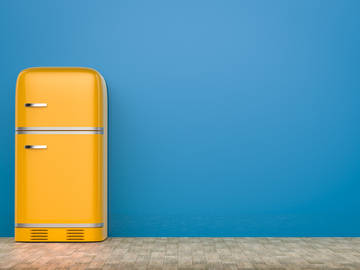 Messing kids up on spelling tests for years.

How, for example, did that d end up in fridge, when the word from which it is shortened—refrigerator—has no d to be found? Who put the d in fridge, and is it still any good?

(It should be noted that, as is consistent with Latin words, frigus and refrigerare were each pronounced with a hard g—that is, like the g in good. The shift to a soft-g sound—that is, pronounced like the g in gesture—in frigid and refrigerate didn't occur until both words were established in English and at the mercy of French pronunciation influences.)

As refrigerators became common in households, it was only natural for a colloquial form of the word refrigerator to drop into the vernacular.

If it is essential that you make up another batch almost immediately, the mixture may be scraped into a bowl and kept in the “frig,” or it may even be placed in the ice-cream compartments of the “frig;” whichever is done, though, it must be stirred to prevent hardening too much.
— The Homestead, Issue 1214, 1939

"I've got a lovely room on the top floor in Montgomery Street, all the same. There's no fridge is the only trouble. … Weather like this, of course, I keep my milk on the window sill."
— Joan Colebrook, The New Yorker, 1 Jan. 1966

'I had an old bomb in those days, a Ford, the Enforcer ..., curtains on the windows, a fridge for the booze."
— Barry Oakley, A Salute to the Great McCarthy, 1970

The word we pronounce \FRIJ\ came about in the 1920s as a shortened and altered form of refrigerator, replicating phonetically the second syllable in the longer word, although early uses were spelled frig.

Some writers acknowledged the clipped nature of frig or fridge by spelling it with an apostrophe:

Our friends across the pond showed a particular interest in the short form. Webster's Third New International Dictionary, Unabridged labeled fridge "chiefly British," though that has since fallen by the wayside.

In another generation, I fancy "photo" will have established itself, and even "fridge" for "refrigerator" may have been admitted into the company of good English.
— John O'London's Weekly, 30 Sept. 1949

So how did we arrive at the altered spelling?

As with many abbreviated forms, it is very likely that fridge was popular in spoken English for a long time before it was used in print with any regularity. Writers deciding how to spell the word needed a spelling that represented how the word was pronounced. Simply cutting the word to the letters in its second syllable, frig, was problematic since words ending in the consonant g are pronounced with a hard-g sound: mug, beg, pig, etc.

The fact is that in English, the terminal \j\ sound, as in \FRIJ\, is almost universally spelled with ge. When the vowel that immediately precedes the \j\ sound is long, as in age or huge, there is no d; when the vowel that immediately precedes the \j\ is short, a d is inserted, as in judge, bridge, lodge, etc. It is not unusual for clipped words to see new letters introduced into their spellings, as in perk for percolate or tater as a dialectical spelling of potato.

The short form frig does continue to exist as a lesser-used variant spelling of fridge:

There are no bottles of Cristal chilling in the frig or forests of potted herb topiaries sprouting out of moss.
— Richard Buckley, W, 4-11 Apr. 1988

But English already has a verb spelled frig—with one sense meaning "to rub or chafe" and another having a more vulgar connotation. The preference for fridge offers a path to avoid that possible misinterpretation.

So before you toss the d out of fridge, you might want to ask around to see if it belongs to anyone first. Unless, of course, it smells really bad.