The word franchise is unusual in that has a number of vastly different meanings that at first glance seem unrelated. 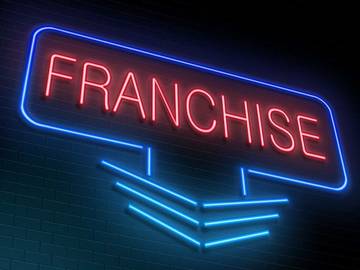 You should probably come up with a snappier name for your restaurant.

Here are a few basic ones:

1) A privately owned establishment that sells the goods or services of a larger company.

You often hear fast-food establishments being called franchises. That refers to how the business is structured. When you go to McDonald’s, you’re eating that company’s hamburgers, but they are sold to you by the person who owns the restaurant, who has been granted a license to sell them by McDonald’s.

Wherever a so-called big-box store or a major restaurant franchise can be found, an urgent care center likely isn't far away.
— Peggy O’Hare, The San Antonio Express-News, 6 June 2015

In actuality, franchises can trade in all kinds of things:

It appeared that in the course of the life and growth of the South Side company there had once been a smaller organization founded by a man by the name of Sippens—Henry De Soto Sippens—who had entered and actually secured, by some hocus-pocus, a franchise to manufacture and sell gas in the down-town districts, but who had been annoyed by all sorts of legal processes until he had finally been driven out or persuaded to get out.
— Theodore Dreiser, The Titan, 1914

2) An organization that is a member of a professional sports league.

Sometimes franchise is preferred over team when stressing the organization’s operations as a business or its history. A player described as a “franchise player” or “the face of the franchise” is the most recognizable player on the team, the one given central attention as the team markets itself to fans.

3) The right to vote in elections.

The primary elections won’t be decided for another month, but Laramie County residents can start casting their votes Friday. Here’s a rundown of how to exercise your franchise, courtesy of Laramie County Clerk Debra Lee:
— Austin Huguelet, The Wyoming Tribune Eagle, 5 July 2018

This sense of franchise is somewhat antiquated and arguably less popular in contemporary English than its synonym suffrage. The use of franchise in the context of voting might be more familiar to some English speakers in the related verbs enfranchise and disenfranchise, meaning to endow with or to deprive of the right to vote, respectively.

A fourth chief sense of franchise has emerged as well in recent years, referring to a series of works (such as movies) that aren’t necessarily sequels but feature the same characters, such as the James Bond franchise and the Marvel Cinematic Universe.

How did one word come to represent such vastly different things?

The core idea that links all of these meanings is that of a right or privilege that is granted. Franchise derives via Middle English from the Anglo-French franchir meaning “to free,” from the adjective franc, meaning “free.”

Franc comes from the Late Latin name for the Franks, a West Germanic people who had come to power in the northern part of Gaul under Clovis I. As they integrated with other inhabitants of Gaul, the name Francus lost its ethnic sense and referred to any inhabitant of Francia who was not a slave or bondman. That’s how francus came to mean “free,” as well as gave us our adjective frank, meaning “honest” or “forthright.”

So a franchise in sports is an organization that has a right to operate and compete within a league; a business franchisee is one that is given license to sell the wares made available by another; and the ability to vote is a right granted to a citizen or member.

The right or license that is at play in the media sense of franchise is the right to use characters and story lines outside of the work in which they originally appeared, as when Star Trek novelizations are published using characters and a story concept originally created by Gene Roddenberry. Or when we finally debut Merriam-Webster: The College Years on premium cable this fall.