Living by the Sword: On ‘Forte’ and ‘Foible’

Etymology on the cutting edge.

If words are your forte, you might know that forte is the word for one’s strong point, or an area in which one might consider oneself an expert:

The 22-year-old will represent her country in three events: 50 free, 100 free and the 800 freestyle relay. The freestyle is her forte, and she has experienced renowned success in individual events.
— Matt Wyatt, The Houston Chronicle, 12 Sept. 2018

It’s sometimes found in negative constructions, often as a manner of understatement about a subject one is not particularly strong in:

Science, let me be clear, is not my forte.

My most noteworthy scientific achievement to date came in the form of a huge, purple-tinted crystal I once grew in my high school chemistry lab. That is until the morning I came in to check on it, only to find that cooler-than-normal overnight temperatures in the lab had reduced it to a mere thread hanging in a jar of supersaturated saline solution.
— Bill Nemitz, The Portland Press Herald, 7 Oct. 2018 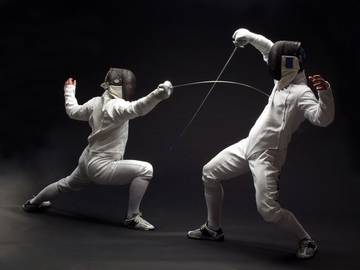 The forte refers to the part of the sword or foil where the blade is strongest, just above the hilt (that’s the handle). The word derives from the French adjective fort, meaning “strong.”

In French, forte is pronounced as a single syllable, but because forte is also a musical direction in Italian, where it is pronounced as \ˈfȯr-ˌtā\, the same two-syllable pronunciation for the “strong point” sense has taken hold.

But forte is not the only word we get from the sword. Conversely, the weakest part of the blade—the part between the middle and the point—is called the foible. That word came to English through French, from the Old French feble, meaning “feeble.” And, like forte, foible can describe an aspect of one’s character, in this case a minor flaw or shortcoming:

It's the curse of the talent scout always to be a sucker for more of a specimen. It's the foible of fat men on the sideline always to think a little more young muscle might execute those drawings in their head.
— Sally Jenkins, The Washington Post, 31 Jan. 2018

Holofcener reassures us that it’s O.K. to laugh at human foibles—we have to, since so much of life is ridiculous and awful—but we’d better not consider ourselves exempt from them.
— Stephanie Zacharek, Time, 13 Sept. 2018

In fencing, the forte is used to execute a parry against the foible of the opponent’s blade. The middle part of the blade, between the forte and the foible, is known simply as the medium.

Hilt finds an extended role in our language by way of the idiom to the hilt, meaning “completely” or “with nothing lacking”:

The cast members camp it up to the hilt, doing everything they can to flesh out their one-note characters
— Melinda Miller, The Buffalo News, 14 Sept. 2018

When you are ready to throw down the gauntlet, remember that we all have our strong points and our weak points, and in that regard, we are like swords.