Are You 'For Reals?'

This article is definitely 'for reals.'

What does it mean when a young person says that a thing is "for reals"? Is it the same as "for real"? And if so, why the additional S? Does this apparently superfluous letter serve a useful role, or is it simply there to indicate something along the lines of "YES!!! I placed a needless letter at the end of a word, and I did it expressly to taunt you! You envy and resent my youth in equal measure, and have resorted to telling people younger than you that their playful language is emblematic of a decline in society. Nevertheless, I shrug off your concerns and have changed the phrase for real to for reals." Not exactly, but maybe not too far off either. 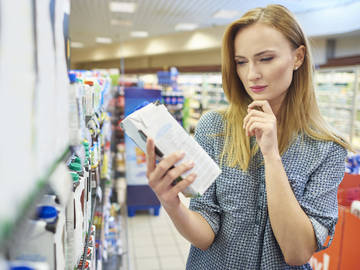 A skeptical shopper unsure if the deal is "for reals"...but it is.

No one can really say why the teen in your life is using the phrase, but though for reals is not yet entered in our dictionary, it is a Word We're Watching, and you should be watching it too.

The use of for reals appears to have begun within the last several decades. There are many theories about where this pairing of words originated (California surfers, people in New Mexico, certain movies, rappers, etc.), none of which have yet established their parentage in definite fashion. Although it may be used as in interjection (indicating approval or assent) for reals also appears to frequently carry the same meaning as one of the intended meanings of for real.

For real has been in use since at least the early 20th century.

I'm going to cut myself from the sordid atmosphere my rich and idle husband has plunged me into. I'm going to WORK, for real, this time.
—Tampa Tribune (Tampa, FL), 7 Nov. 1926

Paulie Walker, who will fight Young Terry at Dunn Field, Thursday night, broke the silence of his training activities yesterday with a loud boast that he will knock out Terry "for real this time."
—Trenton Evening Times (Trenton, NJ), 8 Aug. 1937

It should be noted that for reals is not the first way that we've added something unnecessary to the end of the word real. For realsies has enjoyed a certain degree of currency over the past number of decades. However, before for realsies was firmly established, realsies was used by itself; the initial use of the word, while still dealing with aspects of reality, was focused on a somewhat different meaning than is commonly intended today.

Miss Rollins, looking slicker than when she appeared briefly in Miami last winter, had no trouble keeping the crowd in stitches. She's a tall blonde, wearing a gown that hangs about as low as the law will allow, revealing the Rollins realsies to full advantage.
—Herb Rau, The Miami News (Miami, FL), 29 Dec. 1950

Delicious Miss Hawkins, now singing at the Copacabana, informed me that having a good figure of the kind that Monsieur loathes is even important in peddling records....Al Bernie the comedian, has gone so far as to say that Miss Hawkins "has realsies."
—Earl Wilson, Pittsburgh Post-Gazette, 6 Aug. 1954

This sense of realsies appears to have been coined in response to the already extant use of the word falsie ("an artificial addition to a bodily part worn to enhance appearance; specifically: a breast-shaped usually fabric or rubber cup used to pad a brassiere").

For a week the girls will compete in various phases of the contest. And the final judgment on beauty must be on the up and up—no "falsies" or padding in the bathing suit is allowed.
—Jefferson City Post-Tribune (Jefferson City, MO), 6 Sept. 1942

However, it did not take long for realsies to find itself paired with for, and to become used in senses that matched the various uses of for real.

Torme happened to be present because he is the headline, lead-off star come tonight when the fun starts at Fack's II for realsies.
—Don Steele, The Oakland Tribune (Oakland, CA), 27 Jun. 1956

In blue jeans, a T-shirt and jacket, her dark hair hidden by a red wool cap, she is a dressed-down goddess, 5-feet-9 and long-legged. Synthetic, she isn't. She's for realsies.
—Dallas Morning News, 3 Mar. 1975

By the 1980s for reals was beginning to creep into print.

The word has not been greeted with much enthusiasm.

As characters exchange platitudes and burp cliches, the director, Gene Rhee (who also co-wrote), reveals a clouded eye and a tin ear. Or maybe he just has a lot of friends who actually say "for reals."
—Jeannette Catsoulis, The New York Times, 27 Feb. 2009

We will continue monitoring the use and spread of for reals, and should it meet the criteria for inclusion, will open space for it in our dictionary. This is the point at which we remind you that widespread approval of a new word is not a prerequisite for its adoption into a language (or a dictionary). For reals.