The Story Behind 'First Lady'

Always second to none.

The term First Lady was initially used outside of politics to refer to a woman outstanding in her field or in a high rank. Eventually the term became the norm for referring to the wives of former presidents, and then later, to those of sitting presidents. Like the POTUS, the First Lady has her own acronym, FLOTUS.

Since the middle of the 19th century, the term First Lady has been used to refer to the wife of the president of the United States.

Early uses of the term were applied retroactively to spouses who had held the position in the past. There was no set title used to refer to those women while their husbands were serving. Martha Washington, for example, was known by the simple honorific Lady during her husband's term as President. Lady calls back to the feudal age, when that word was used as a title of nobility—either one who was parallel to a lord or the wife of someone with the title Lord. Other titles found in media of the day included "Mrs. President" and "the President's Wife." 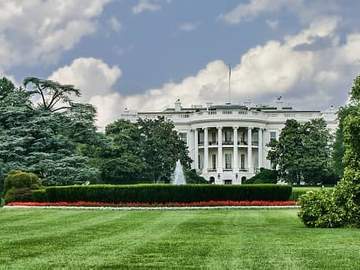 This information brought to you by the Dictionary of the United States.

The phrase First Lady had already been established in non-political arenas for a woman outstanding in her field, or a high-ranking position.

I was no sooner carried away, as I have said, by this good gentlewoman, but the first Lady, that is to say, the Mayoress that was, sent her two daughters to take care of me….
— Daniel Dafoe, Moll Flanders, 1722

MRS. FAIRFIELD (clasping her hands).--"We were proud of her, all of us,--father, mother, all! She was so beautiful and so good, and not proud she! though she looked like the first lady in the land. Oh, Nora, Nora!"
— Edward Bulwer-Lytton, My Novel, or Varieties in English Life, 1853

The Wife of a President

It is not clear when the phrase settled on its particular meaning applying to a presidential spouse. President Zachary Taylor was purported to have used First Lady in a eulogy for Dolley Madison, the wife of President James Madison, in 1849, but no text of his speech exists to confirm this.

The first lady of the nation still preserved the habits of early life... The President and herself attended public worship with regularity.

Two years earlier, however, following the election of Martin Van Buren to the presidency, the New Bedford (Mass.) Mercury used the phrase "first lady of the Republic" in an apparent reference to "the wife of Mr. Van Buren's Vice President." (It is not clear to whom this refers, as Richard Mentor Johnson's common-law wife, his one-time slave, was by then deceased.)

The first woman to regularly receive the title First Lady during the time when she actually served in the position was Harriet Lane, who was not the wife of President James Buchanan (for he was a bachelor), but his niece. Lane performed much of the duties of public greeting, hosting, and appearance that to that point had been performed by presidential wives.

As First Lady became the familiar term, other comparable terms followed by natural extension. In recent years, the label Second Lady has applied to the wife of the Vice President of the United States; it is used, for example, in the Twitter handle of Karen Pence. First Family has come to serve as the collective name for the president along with their spouse and children (though more typically when the children are of younger age and living in the White House).

In the event the U.S. were to elect a President whose spouse was a man, the likely preferred term for that person would be First Gentleman.

First Lady can also be used for the wife or female partner of an executive of lower office, such as a state governor. First Gentleman also sees use as that person's male partner:

First Lady sees some use in American publications for the wife or female partner or a head of state of another country, though not every country uses this term among their own leadership. Some Spanish-speaking Latin American countries, for example, use the label Primera Dama (literally, "First Lady").

And of course, as with POTUS, the position of the First Lady of the United States is now commonly rendered as an acronym:

Betty Ford (probably kept away from the 1976 podium thanks to her feminist views) and Rosalynn Carter managed to avoid convention speeches, but the mold was finally broken by Nancy Reagan in 1984 and 1988. Since then, every sitting FLOTUS has addressed the party convention.
— Ed Kilgore, Intelligencer (New York Magazine), 25 Aug. 2020

The Second Lady has her own acronym:

We already know not to call Dr. Jill Biden the "Second Lady" — she prefers "Captain of the Vice Squad," as revealed on Late Night with Seth Meyers. The latter more aptly describes her never-ending list of impressive accomplishments, from her decades-long career as an English teacher (and the first SLOTUS to hold a paying job while her husband was Vice President) to holding a doctorate in Education from the University of Delaware (along with two other Master’s Degrees).
— Erica Witte, Refinery29, 23 Nov. 2016

The 2020 Presidential Election saw that Doug Emhoff, the husband of Vice President-elect Kamala Harris, will become the first-ever Second Gentleman of the United States, or SGOTUS. (Not every acronym can roll off the tongue.)