Figment: You Can't Make This Up!

Figment means "something that doesn't really exist," as in "a figment of your imagination." It's related to other words for things that don't exist through a common ancestor, though you might never have connected these words before. 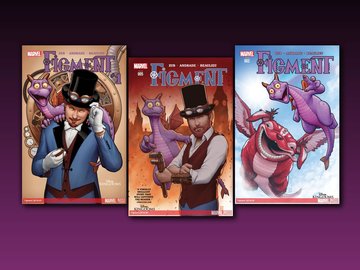 The Latin root of figment is the verb fingere, which means "to shape" or "to form." It also gave us feign, which means "to give a false appearance of" or "to pretend." Fiction, meaning "an invented story" or "something that is not true" is another descendant, as is effigy, which means "a crude figure representing a hated person."

That sounds pretty heavy, but the term can be used in a more fanciful way as well — as Disney did when naming the dragon mascot at their Imagination Pavillion. Figment of the Imagination. Get it?