Feign means "to give a false appearance or to fake something (such as illness)." Feint also involves deception, but usually refers to physical movements meant to distract an opponent, such as a fake punch. Lastly, faint as an adjective can mean "barely perceptible" and as a verb refers to losing consciousness. 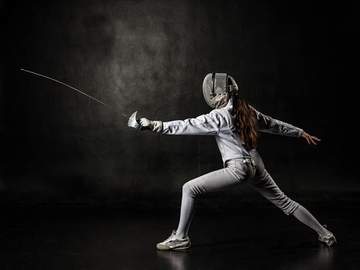 Words are our forte.

In feign, feint, and faint, English has three similar-sounding verbs that overlap in certain ways that can lead to their being confused.

Feign means to give a false appearance of something, or to pretend that it is true.

She often feigned illness, hoping the school nurse would send her home. That’s why, when she heard her brother, Tanner, tell their mom he had a sore throat and would go to the doctor instead of school that day, she said she, too, felt sick.
— Jordan Erb, The Indianapolis Star, 22 Oct. 2020

The manager turned to me and winked. He wasn't new to chess at all. He was hustling. Time after time, customers came in and commented on the chessboard. The manager feigned ignorance, proposed a bet, and proceeded to beat the tar out of every single one.
— Steve Straessle, The Arkansas Democrat-Gazette, 26 Dec. 2020

Feint is another verb that pertains to deception. As a noun, it essentially means "something feigned," thought the verb feint usually applies specifically to a motion made with the body in order to distract an opponent (as in a fistfight).

After cracking Wineland with an overhand right, O'Malley feinted with an uppercut before letting loose with another overhand, this one crashing clean to Wineland's jaw.
— Brent Brookhouse, _CBSSports.com _, 7 June 2020

Naturally, feint sees frequent use for similar decoy-like moves made in other sports:

[Jayson Tatum] calmly sized up Derrick Jones Jr., dribbled twice between his legs, feinted as if he was going to drive right and then, at the last second, snatched the ball back to set up what’s quickly becoming his trademark move: the step-back three. It missed.
— Michael Pina, GQ, 17 Sept 2020

Before the Bears’ first offensive snap, Smith feinted toward the line, then dropped deep into a Cover-2 alignment with Harris.
— Jim Souhan, The Minneapolis Star Tribune, 22 Nov. 2020

Of the two verbs, feign has the broader meaning, and so you might see it for verbs of motion where feint would be suitable (as in "the quarterback feigned a throw before running with the ball"). But the converse is not true; one does not "feint illness," for example.

Feint has a homophone in faint, which can be an adjective meaning "barely perceptible" (as in "heard a faint howl" or "a faint light on the horizon") or lacking courage ("not for the faint of heart"), among other things. The verb faint has archaic meanings referring to the loss of strength or spirit, but in modern use almost exclusively means "to lose consciousness":

On Thursday morning in Hyde Park, two students in a baking fundamentals class fainted, according to CIA spokesperson Amanda Secor. As medical officials from the Roosevelt Fire Department responded, others said they did not feel well.
— John W. Barry, The Poughkeepsie Journal, 18 Sept. 2020

Syncope is the medical term for fainting. When you faint, you lose consciousness for a short time. Overall, syncope is caused by a decrease in blood flow to the brain, which can lead to a temporary loss of consciousness.
— Jill Seladi-Schulman, Healthline, 15 June 2020

One might pretend to faint when feigning illness, but an athlete who faints rather than feints would need medical attention.