English has a number of words to refer to typographic mistakes, but there’s one that we’ve been seeing more and more of in print: fat-finger. 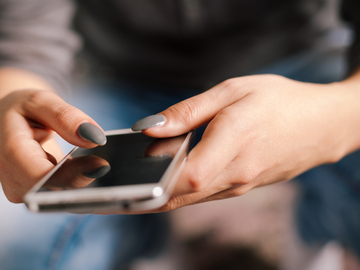 'Fat-finger' originally referred to a method of intentionally and haphazardly hitting phone buttons. These days, it's a verb that means "to mistype something."

Fat-finger (which sometimes also appears as fat finger) is a verb that refers to mistyping something, as in “I fat-fingered her email address and sent my message to the wrong person.” In an age of shrinking electronics and tiny phone keyboards, it’s easy for even the sveltest to fat-finger a text.

This type of fat-fingering began life not to describe a harmless slip of the finger, but to refer to intentionally and haphazardly hitting phone buttons, as explained in this 1990 citation: “Your college's phone bill has skyrocketed, because of student hackers using the ‘fat-finger’ method of pounding out a combination of phone codes to place unauthorized long distant calls” (Tom Steinert-Threlkeld, Dallas Morning News, 13 March 1990). This attributive noun grew to refer to unintentional errors, and particularly ones that are caused by a slip of the fingers.

Fat-fingering has been fingered in a number of significant events, including a 2014 trade in Tokyo that inadvertently put a majority share of Toyota Motor Company on the block, and a 2014 voting snafu that directed people to the wrong party primary (since the “R” and the “D” are close together on the keyboard). It’s even shown up in Homeland Security hearings on TSA software problems, where it is given what looks to be a military-specific meaning that refers to entering information into a computer or system manually (regardless of whether what's entered is correct or not).

We're considering it as a candidate for possible entry in the dictionary. If we do add it, we'll be sure to check our spelling.