Faster Than a 'New York Minute'

It's older than just a flash

We all know that certain countries and certain languages go hand in hand; in France most people speak French. Furthermore, the policies of a country such as France over the centuries have had a marked influence on how the French language has spread (through colonization, war, and trade). To a lesser extent certain cities will also have a marked effect on a language. This is particularly true if, as is the case with London, Paris, or New York, the city is a melting pot of a wide range of disparate linguistic registers and languages. But rarely do cities get the chance to attach their name directly onto some portion of the language. As in New York minute. 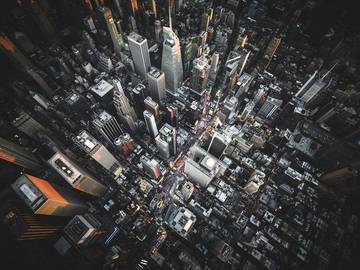 Time flies when you never sleep.

A New York minute is defined as “an instant, a flash.” This linguistic reappraisal of time in the East coast metropolis may be viewed as poking fun at the city’s self-aggrandizement or as an accurate reflection of its tumult and hurly-burly atmosphere. While it had previously been thought that the expression came about in the middle of the 20th century, it turns out that people (especially those who are not from New York) have been describing short instances of time thusly since about the Civil War.

Fast driving is rampant in this city. No effort is made to prevent it. Drivers and pleasure seekers try to fly from one end of town to the other in about a New York minute.
— The Leavenworth Bulletin (Leavenworth, KS), 12 Jul. 1870

He found it, and in one-fourth of a New York minute all the clothes there upon him would not have made a bib for a child doll.
— Virginian-Pilot (Norfolk, VA), 18 Aug. 1870

New York is hardly the only city to have its name gracing the description of a quality or thing which is associated with that city. Pittsburgh feathers, while largely found in the realm of hobo slang, has been used to refer to coal (due to vagabonds sleeping in the coal cars of trains).

No offense meant. I can see you’re bohoboes—you know, fresh at the game. You’ve got to sleep side-door Pullmans an’ on Pittsburgh feathers before you look regular.
— Gasoline Alley (comic strip), 11 Aug. 1937

London is associated with a number of words; one which nicely captures the spirit of this city in the 19th century is London ivy (“the smoke or the thick fog of London”).

For smoke, which is the London ivy, had so wreathed itself around Peffer’s name, and clung to his dwelling-place, that the affectionate parasite quite overpowered the parent tree.
— Albany Evening Journal (Albany, NY), 29 May 1852

Often the word or phrase associated with a city is connected to food or drink, either due to it being produced there, or because of a geographic proximity. Though little used today, the sturgeon was at one time frequently referred to as Albany beef.

It was then cut up and given to the workmen of a foundry on the eastern bank of the river, who made an excellent supper on this Albany beef. If the sturgeon had thrown himself on one side of the heavily loaded boat, it would have been overset….
— Niles’ Weekly Register (Baltimore, MD), 13 Aug. 1836

In many cases these words associated with cities evoke a bygone era; sturgeon is not as common a food in Albany as it once was, and the economy of Pittsburgh is less dependent on coal than it was a hundred years ago. These terms now serve as vestigial memories, evidence of a time and place that's been gone a bit longer than a New York minute.