‘Fascism’: The Word’s Meaning and History

Fascism refers to a way of organizing society with an emphasis of autocratic government, dictatorial leadership, and the suppression of opposition. The word entered English as a result of Mussolini's 'fascisti' in Italy, but 'fascisti' and 'fascio,' both referring to a bundle, were used to represent labor and agrarian unions in Italy since at least 1872. 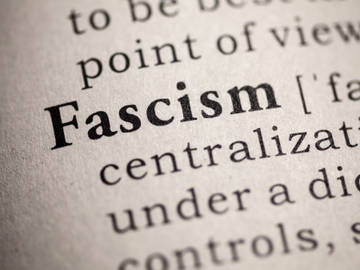 In simplest terms, fascism refers to a specific way of organizing a society: under fascism, a government ruled by a dictator controls the lives of the people in that society, and allows no dissent or disagreement. This dictionary defines the term in full as:

1 often capitalized : a political philosophy, movement, or regime (such as that of the Fascisti) that exalts nation and often race above the individual and that stands for a centralized autocratic government headed by a dictatorial leader, severe economic and social regimentation, and forcible suppression of opposition

2 : a tendency toward or actual exercise of strong autocratic or dictatorial control

The Origin of 'Fascism'

The word Fascisti, mentioned in the definition’s first sense, refers to members of an Italian political organization founded by Benito Mussolini in 1919 and dedicated to violently nationalistic and totalitarian principles. The Fascisti gained control of Italy in 1922 and reorganized the country’s political and social structure to accord with fascism. The Fascisti also used the fasces—a bundle of rods with an ax among them—as a symbol of the Italian people united and obedient to the single authority of the state.

Given this set of facts, it’s not surprising that people credit Mussolini with coining the word fascisti, and with the fascisti adoption of the fasces as a symbol. The truth, however, is a bit more complex.

Before WWI and WWII

From at least 1872, the word fascio was used in Italian in the names of labor and agrarian unions. Fascio (the plural of which is fasci), which has a literal meaning of “bundle” and a figurative meaning of “group,” harkens back to an earlier—and grander—time in the peninsula’s history: in ancient Rome, there were officers, called lictors, who accompanied the chief magistrates in public appearances, clearing the way for them and summoning and punishing offenders as the magistrate saw fit. A lictor would also carry the fasces for his magistrate. The fasces, called in Italian “fascio littorio,” was a long bundle of elm or birch rods with an ax head projecting from it, all tied up with a red strap. According to our friends at Encyclopedia Britannica, when the fasces were carried inside Rome, the ax was generally removed as a symbol of the right of a Roman citizen to appeal a magistrate’s ruling. Our colleagues mention two exceptions to this practice: the ax was kept in on the happy occasion of a general celebrating a triumph, as well as in the less happy circumstance of a magistrate also being a dictator.

The Italian fasci of the late 19th and early 20th century were typically focused on the interests of workers and their families, but in October 1914, a political coalition called the Fascio rivoluzionario d’ azione internazionalista (“revolutionary group for international action”) was formed to advocate Italian participation in World War I on the side of the Allies. By January 1915, this group’s members were being referred to as fascisti. Mussolini was closely associated with this interventionist movement, but the movement had no direct link with the fasci di combattimento (“fighting bands”) he gathered in 1919—bands which then inspired the many Blackshirt squads who facilitated the fascist takeover of Italy in 1922. Mussolini’s fascisti made the stronger impression, but they were not the first to be called such.

The English words fascist and fascism are first cited in 1919 and 1921, respectively, and are indeed related directly to Mussolini’s regime and its philosophy, but fascisti, and their fasces, precede him.

Among other assertions made about the word fascism is that Mussolini equated fascism with corporatism (sometimes rendered as corporativism), which this dictionary defines as:

We, being a dictionary, aim to stick to the words, and so will not address what Mussolini said about fascism and corporatism. (The fact-checkers at Snopes treat the topic ably, for those who are interested.) However, tied to the assertions about fascism and corporatism are additional assertions about how this company’s definition of fascism has been affected by changes in the company’s ownership. Those assertions are false. Merriam-Webster has been a subsidiary of Encyclopedia Britannica since 1964. No Merriam-Webster definition of fascism, before or after 1964, has ever mentioned the words corporation, corporatism, or corporativism.