If we were to make a taxonomy of portmanteau words, we would see that they naturally fall into several categories. Some—like smog and electrocute—have become so familiar that we barely register them as blends. Some are transparent combinations of other words, but are so common that we accept them without question, like brunch, sitcom, and motel. There are blends that might initially be seen as self-conscious and even jocular, but, when used frequently and over a long enough period of time, merit entry in dictionaries (see turducken and sheeple). Others might be too recent to be included in our dictionary (Brexit), so silly that it’s hard to imagine that they might one day be entered (sharknado), or just too painful in their reminder of the ephemeral nature of fame and love (Brangelina, Bennifer).

A few, however, feel so natural as to seem inevitable: the sound and meaning of the combined words make the definition come immediately to mind. One such term being used with increasing frequency is starchitect. 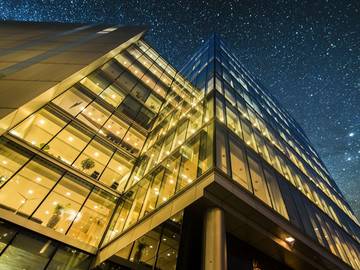 In a field where superstars like Frank Gehry, Richard Meiers, Daniel Libeskind, and Renzo Piano design spectacular and beautiful museums, homes, and public buildings, their aesthetic can become a trademark, making them celebrities of the field.

The first uses of starchitect might be considered puns:

Starchitect. Jan Clayton, now playing the romantic lead in "Father is a Prince," designed the home she and her husband are building.
—The Atlanta Constitution, 20 Oct. 1940

But, as with most portmanteaus, time has added respectability and usefulness to the term, meaning “a famous architect.” It started to be used more seriously by the late 1980s:

Architect Helmut Jahn, who was recently described as one of Chicago's "starchitects" for buildings he designed that reshaped the financial and civic axis of the Loop, was in Los Angeles last week for a topping-out high tea for The Tower, the 23-story office building he designed for the Prospect Co. and Platt Development Corp. at 10940 Wilshire Blvd.
—Ruth Ryon, The Los Angeles Times, 26 Apr. 1987

We now see it in both the specialized and the general press, indicating that the word’s use has broadened considerably:

A decade later, the 30-something innovator has left his airy-artist-loft days behind for a decidedly more polished and refined living space in a sleek, starchitect-designed building alongside the Hudson River.
—Bevan Andrew, Architectural Digest, September 2017

The starriest of starchitects are on the shortlist to design London's new Center for Music, a future home for the London Symphony Orchestra and the Guildhall School of Music and Drama.
—Roslyn Sulcas, The New York Times, 11 July 2017

And perhaps its use in in headlines shows the final frontier of acceptance for a new word:

The passage of a word from jargon to standard English is a mysterious one that requires a combination of time and gradual acceptance by writers and editors in order to be successful. Every word must pass these stages on its own terms and in its own time. For now, starchitect seems to be on its way to architecting itself a place in the language.