This Expletives Article is SFW

You don't need to delete these expletives, but maybe you should…

Can you find the expletives in the following sentences?

There are 10 people in line.
It was the final goal that won the game.
There were delays that plagued construction.
It is your vote that counts. 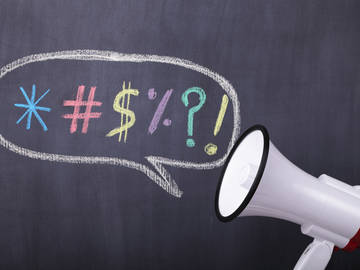 All these statements could air on network TV because the expletives that occur in the sentences above are not the obscene ones.

Expletive meaning "an obscene or profane word" goes back to the 17th century.

This he had learnd, belike, of the ruffianly souldiers, with whom usually, execrations are but expletives, and horrible oathes, interjections of speech.
— John Trapp, A commentary or exposition upon the four evangelists, 1647

This sense of the word gained popularity during the Watergate hearings in the early 1970s when the transcripts of the White House tapes relating to the scandal were published with the profanities replaced with the phrase "expletive deleted."

To Haldeman's remark that Federal Reserve Board Chairman Arthur F. Burns is worried about speculation in the Italian lira, Nixon is shown replying, "Well I don't give a (expletive deleted) about the lira."
— Science, 23 Aug. 1974

However, before being used for bad words, expletive was the name for "empty" ones. Back in the 15th century, grammarians sought a term for words and phrases that served no purpose but to fill out a sentence or metrical line without adding to its meaning. They turned to Latin expletivus, meaning "serving to fill out," as a fitting name, altering it to expletive.

In the sentences at the beginning of this article, the grammatical expletives are "there are," "it was," "there were," and "it is." They are expletives because they can be removed without affecting the meaning conveyed by the words that follow. Removing an expletive not only makes a sentence more concise but conveys meaning explicitly.

Grammatically, the expletives in our introductory examples are words used to signal to the reader or listener that the true subject will follow. This aspect of an expletive brought about its nickname "dummy subject."

Constructions like there is and it is are not always expletives when they are used at the beginning of a sentence. Take for example:

"I have always loved painting. It is one of the most important parts of my life."

In the first sentence, the word painting is introduced. The pronoun it is then used in the following sentence in place of painting. Because painting was mentioned previously, the reader or listener is aware that the antecedent of it is painting, giving it meaning. This means it is not an expletive—a filler for a subject to come—but is the subject of the sentence and, hence, has grammatical meaning.

Overuse of expletives can definitely deflate your writing, but an occasional expletive here and there can be useful in varying sentence structure and adding a welcome change of pace to a complex piece of writing. Generally-speaking, the non-grammatical expletive should be avoided in formal writing since it, too, does not add meaning to statements—however, it may be effective in communicating tone or mood.

Like the more rated-R expletives, you should really evaluate if that situation calls for one before putting it in your writing.