The Sinister Origins of 'Fascinate'

Fascinate comes from the Latin word for "evil spell," and originally meant "bewitched" or "spellbound" in the literal, more sinister sense. The word eventually took on the less evil, more metaphorical meanings "to command the attention of" or "to captivate."

Almost all words in the English language will change meanings, or add some new shade of meaning, provided they’ve stuck around for more than a century or two. Sometimes this change is a stark one, as in the case of terrific, which has gone from meaning “exciting fear or awe” to “golly, that’s swell!” (the second one is not an official Merriam-Webster definition). Other times the change is more subtle, as is the case with fascinate. 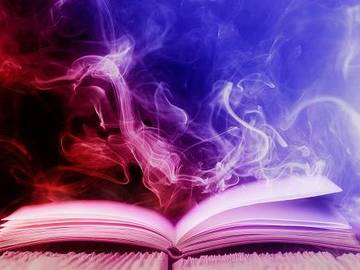 You will continue reading, then click on several other articles...

When fascinate was first defined in an English dictionary, in Robert Cawdrey’s 1604 A Table Alphabeticall, it was as “to bewitch, or disfigure by inchantment.” This is unsurprising, as the word, recently come into use in English, and taken from the Latin fascinum (“evil spell”), was entirely used in this manner.

…eies such as can fascinate the tender lambes of Diana, and for their pleasure have induced them to adversitie eies that are poreblinde, and therefore looke nigh unto others.
— Thomas Bradshaw, The shepherds starre, 1591

I saie first, that this reason seemeth to carrie a maiestie with it, and a verie plausible shewe of truth, and therefore did it a long time fascinate and seduce my selfe, yet I trust by Gods holy assistance so to solve it, as no papist shall have cause any longer to glorie therein.
— Thomas Bell, The survey of popery, 1596

When they have brought in theyr Conies, and made them as sure, as flesh and blood can make them, have enchaunted them with their compassionate devotion, have engaged them unto their ghostlie Fathers, have fascinated them with their solemne incantation….
— Samuel Harsnett, A declaration of egregious popish impostures to with-draw the harts of her Maiesties subiects from their allegeance, 1603

The noun form (fascination) and the adjective (fascinating), both of which came into use about the same time, likewise carried meanings similar to “spellbound.”

And finding the intention of their harts so manifestly testified by printed bookes, by daily and publike speaches, by frequent facts and deedes, from yeare to yeare, and from day to day renewed: can it be lesse, then a plaine fascination and sorcery, if your Queene can not yet be induced to see it?
— John Leslie, A treatise of treasons against Q. Elizabeth, 1572

…that men as you are, borne free of an understanding spirit, and ingenious disposition, should so basely degenerate, as to captivate your wits, wils, & spirits, to a forraine Idol Gull, composed of palpable fiction, and diabolicall fascination, whose enchaunted chalice of heathenish drugs, & Lamian superstition, hath the power of Circes, and Medaeas cup, to metamorphose men into asses, bayards, & swine.
— Samuel Harsnett, A declaration of egregious popish impostures to with-draw the harts of her Maiesties subiects from their allegeance, 1603

The very Tone of some of their voyces, a pretty pleasing speech, an affected tone they use, is able of it selfe to captivate a young man; but when a good wit shall concurre, arte and eloquence, fascinating speech, pleasant discourse, the Syrens themselves cannot so inchant.
— Robert Burton, The anatomy of melancholy, 1621

Over the past four centuries fascinate has broadened its meaning, bit by bit, moving steadily away from “literally under a spell.” In the word’s earliest use it frequently appeared in strident writings about religious conflicts (primarily those between Protestants and Catholics); in current use the word is most often encountered in the sense of “to command the interest of,” as evidenced by the following use:

Fascinating shift in thinking: UN recognises need to conserve chimpanzee “culture”. It is the first time, it seems, that one species has formally recognised the value of another’s learnt customs.

(Thanks to Andrew Whiten and Ian Redmond for help w story)https://t.co/622RkW5ux9